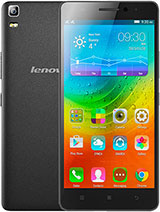 Anonymous, 06 Jun 2018Been using it since 2016. No problem except the touch is un... moreWhere did you get that resurrection rom and modem ? I need them .

This is comparable to the Samsung J7 Prime... Except the ram is a little smaller than the J7 Prime, but this is still usable right now.

Please I need this type of lenovo, how can I get some?

This is really awesome it camera is good and it has heating problem and about it's battery ....it was fine for 2 yrs but it drain very fast when less than 40 and charge slowly when less than 40 after 40 it charge like it has been boosted and I play games like LAST DAY ON EARTH and Coc but it never lag ising Facebook Twitter Instagram never ever leagged ...that's what I like the best

Been using it since 2016. No problem except the touch is unresponsive at certain point and I had to lock the screen and unlock it to make it responsive. Recently it became too often that the screen unresponsive that forced me to install twrp and flash K3 note resurrection remix custom ROM. I had to flash A7000 plus modem to make the mobile data to work again. It was worth it as if it's a new phone.

I believe this is actually 720p

which is better, lollipop or marshamallow?
for battery , perfomance and gaming...

which is better, lolipop or marshemello?

Pretty awesome device, got exactly the same one when I lost my first, a year and a half of heavy duty usage never let me down, no lag, no battery issues, no monkey business, just lost the mic with a hard shock, smashed the screen partially on another shock, still working :)

my lenovoA700 is not working because the board is destroy and i think the problem of my phone will not solve..theres no solution on my phone..i need to buy a new board for my phone...hope theres any one can help my problem in my phone..pls..help.help..

For its camera, performance, multi tasking, this phone is good. But for me after 2 years of using this phone, its touchscreen problem got worse and its heat problem. I have to lock then unlock the phone so i 'refresh' the phone touchscreen.

Anonymous, 14 Jun 2017Got this for my birthday in 2016. This phone is the absolut... moreYou shouldn`t play games on your phone, that`s not what it is made for... Buy PC for games, and if you can`t then don`t play games... This phone is one of the best i had for the amount of money i paid for it, and there is no competition for it when it comes to spec and value...

Been using this phone for about 6 months. No problems at all. Camera could be better but overall it's a very decent phone. No regrets buying it.

Got this for my birthday in 2016. This phone is the absolute worst at playing games, and I'm talking about old school Final Fantasy style graphics, pixels. You'll get 5 minutes of decent frame rate before the phone overheats and the CPU is throttled down (no way of changing this).

Anonymous, 08 May 2017This phone is worst!!! This is bad performance touch heatin... moreThis phone is actually decent for hd games. Im a gamer and so far ive gotten good performance but for some i had to turn the grphics down. The 2 gb ram sure is useful.

please help me , my lenovo a7000 plus can't charge in the state on, but if in a state of power off, it can be charging,anyone can help me? :(