At the ongoing Mobile World Congress (MWC), Lenovo has announced a new 'Tab 4' tablet series, consisting of Lenovo Tab 4 8, Lenovo Tab 4 8 Plus, Lenovo Tab 4 10 and Lenovo Tab 4 10 Plus. The new tablets come in two different display sizes (8-inch and 10-inch) and are further categorized as standard and Plus variants. The 8-inch/10-inch standard Tab 4 tablets are powered by Qualcomm MSM8917 (Snapdragon 425) chipset and sport a 1,200x800-pixel resolution display. RAM is 2GB, while storage options include 16 or 32GB. The camera department is handled by a 2MP front unit and a 5MP rear unit.

Both standard as well as Plus versions have stereo speakers with Dolby Atmos, run Android Nougat, and come in WiFi+LTE and WiFi-only models.

As for price, the regular 8-inch and 10-inch Tab 4 tablets cost $109 and $149, respectively, while the corresponding Plus variants carry a price tag of $199 and $249, respectively. They'll be launched in May this year.

Lenovo is also offering two separate kits aimed at making these tablets suitable for kids and office. The Kid's Pack includes a protective bumper, 3M stickers for scratch protection, and a blue-light filter. 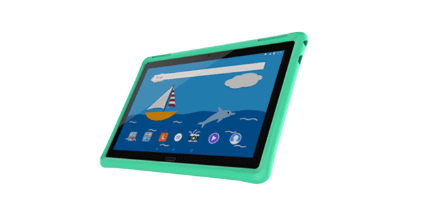 The Productivity Pack - aimed at office goers - will let users convert their tablet into a 2-in-1 with a Bluetooth keyboard and trackpad.

Those using this pack will also get a laptop-like experience from their tablet with features like fast app switching and multiple windows support, as well as a taskbar.

There's currently no information on the pricing and availability of these packs.

Finally a 10" ish Landscape tablet, not a lover of the Samsung portrait format tablets.

I concur, the Lenovo Tab 4 10 Plus especially looks very enticing with good specs for it's $249 price. I also wish Lenovo would revive the Motorola XOOM tablet series.