Earlier this month, we came across a listing for a trio of Motorola and Lenovo smartphones. One of them was the Lenovo K13 bearing the XT2097-15 model number. We now have our first look at the upcoming phone which is expected to launch globally as the Moto E7i Power. 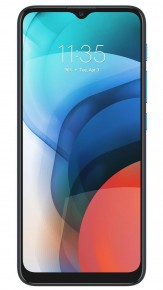 Lenovo K13 in Red and Blue

The Lenovo K13 sports a 6.5-inch HD+ display with a punch-hole cutout and a 5MP selfie cam. The back houses a 13MP main cam alongside a 2MP depth sensor and LED flash. The back appears to be made from plastic and also houses a fingerprint reader.

The K13 is said to be powered by a 1.6Ghz octa-core processor though we don’t get a chipset model. It should launch with 2GB RAM and 32GB storage which will be further expandable via microSD.

The leaks point to Android 10 on the software side and we’re expecting the phone to boast a 5,000 mAh battery which charger over USB-C. We’ll be on the lookout for more details and will update you as they emerge.

Lenovo K12's global version will be a rebranded Moto E7

Trio of upcoming budget Motorolas leak with renders and specs

it's a moto e7 with a different camera cut out