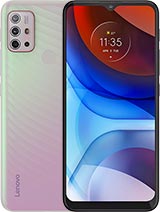 Fitted254, 25 Jun 2021Lenovo doing what xiaomi does with poco phones only that le... more1 main screen side slide no have
2 battery like 3000 mah very fast draining

From where can i buy it in India?

Lenovo doing what xiaomi does with poco phones only that lenovo did not change anything once they copied the homework coz basically this is a Moto G10 in all aspects down to the looks.

Jhe, 24 Jun 2021You're right about different consumer preferences, and... moreOf course. Since this is a budget low-end device I wouldn't fault it for having a 720p display. And you are right, the display isn't too low-res to the point that all they see are pixels. I guess what I was trying to say is that it is clearly obvious to someone that this phone's screen is not sharp (i.e. not HD). The illusion of "high-definition" only appears when the DPI is 330 and above.

NeonHD, 24 Jun 2021If battery life is your main priority then okay fair enough... moreYou're right about different consumer preferences, and that '270ppi is more than enough' thing. I just don't agree that 270ppi will make pixels CLEARLY visible to everyone in day to day use even at 6.5" display, its just not as sharp (try asking an elderly). And here in the budget category, a no-visible-pixel-display isn't a top priority. Its not just about battery life I'm talking about - its balancing pros and cons for a trimmed down price that's more evident in this budget segement. Mobile games are becoming more mainstream, low res panels can benefit gamers who would want every little help they can get to push FPS and reduce stuttering on phone with a specs they can afford (coz more pixels require more processing power), also 720p media content is still a thing especially for places/users that needs low bandwidth. So yeah, priorities. But if this is a mid range device, I'll surely join you criticizing a low res display. Hehe

Jhe, 24 Jun 2021I'll gladly take the less sharper 270ppi over 330ppi f... moreIf battery life is your main priority then okay fair enough. Everybody has their own use cases. My comment was mainly in response to the previous commenter who said "720p is more than enough", which is not true at all from an aesthetic viewpoint, which like I said earlier is based on the rationale that the eye stops treating the screen as pixels beyond 326PPI. 326PPi should really be the bare minimum for smartphones.

Also I really doubt that there would be any significant difference in battery life between 270ppi vs 330 ppi.

NeonHD, 22 Jun 2021> 720p is more than enough. False. It has already ... moreI'll gladly take the less sharper 270ppi over 330ppi for a hand held device if it means less power draw; saving battery life and lesser processing power thus greatly reducing cost. Its not like every people would stare few inches away from their phone screen distinguishing individual pixels.

NeonHD, 22 Jun 2021Even the K6 Note was a bit underwhelming tbh. This is comin... moreYesterday, Lenovo released the K13 Note.
But, how does it work?

At the time the K3 Note was considered one of the best budget mid-range phones. It had a strong mediatek chipset that pulled an average antutu score of 47K-50K, which scored higher than the SD801. The display was 5.5" 1080p and it had very deep blacks for an IPS. The back was actually removable and you could replace the battery. All this for $150, which was an insane deal back then.

Compared to the K6 Note, the K3 note still had a more powerful processor, was a bit thinner, and had replaceable battery. I am VERY proud and happy to be a K3 Note owner, it was actually my first phone and had so much good memories with it. Probably the best phone from Lenovo, honestly. The K5 Note (2016) was also pretty good and still had a better chipset than the later K6 Note.

BTW I don't mean to insult the K6 Note, obviously you had some great memories with that phone too.

It has already been proven by Apple precisely ten years ago that the human eye cannot distinguish individual pixels with a PPI (pixels per inch) of more than 326. This phone has a PPI of 270, therefore the pixels are clearly visible and thus do not provide that minimum sense of clarity. Even the iPhone 4 with 326 PPI would look much sharper than this phone.

It is really not the matter of the resolution, but rather the PPI, which is determined BOTH by resolution and the size of the display. 720p on a 5 inch display would for sure be more than 326 PPI, but 720p on a 6.5" display is barely sufficient.

Many things are a PR thing, this is not. If you want real scientific proof, go look up 'Fovea centralis' on Wikipedia and read section 3.1. I doubt you'll understand it, though.

EDIT: Let me just point out that I do agree with your statement that "Full HD on 5-inch display" is plenty enough. It's not overkill, but it's plenty enough. However you seem to be implying that 720p on a 6.5" is more than enough, which is simply not true.

Anonymous, 22 Jun 2021Full HD on 5-inch display is overkill and mostly a PR thing... moreI mostly agree, but in my opinion it should have at least 300 ppi.

Light, 19 Jun 2021Unbelievable. I have a Lenovo K6 Note which was released in... moreFull HD on 5-inch display is overkill and mostly a PR thing, like those 108 megapixel cams on a smartphone. 720p is more than enough - all you really need is a bright screen with correct color representaion, not more pixels.

Unbelievable. I have a Lenovo K6 Note which was released in 2016 and it even has a full hd resolution and a Snapdragon processor as well. While this one has a 720p resolution with a not so popular SoC. Their Note series these days are definitely going backwards, they're not generous like they used to when it comes to specs. The design of the device is fine but the internal specs are questionable. This device should be the better version of the previous note series but just look at this, this is ridiculous. They're also not active when it comes to releasing software phone updates so don't expect an update every now and then. They should get their s**t together and maybe they'll be popular like Xiaomi. This is only my opinion.