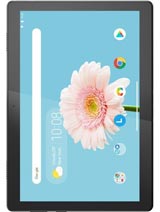 Anonymous, 01 Dec 2020What Bluetooth Version does this tablet have?Comes with Android 9 and upgraded in 10

Anonymous, 01 Dec 2020What Bluetooth Version does this tablet have?It has bluetooth 4.2

What Bluetooth Version does this tablet have?

Anonymous, 29 Jun 2020Why doesn't GSMARENA list the better version of this ? ... moreMaybe your seing the weong model

Anonymous, 29 Jun 2020Why doesn't GSMARENA list the better version of this ? ... moreBecause from time to time, GSMarena sucks at listing specs.

Anonymous, 29 Jun 2020Why doesn't GSMARENA list the better version of this ? ... moreWhat is model no of your new version of lenovo

Why doesn't GSMARENA list the better version of this ?

The wifi is rubbish. I have an AC3200 wifi router that can do gigabit, my internet is 500mbit, on my mobile phone I can get full 500mbit .. on this brand new tablet, maximum of 90mbit every time I run a speed test. Doesn't matter which speed test I use it never goes to even 100mbit let alone 500 and I've checked and it is on the 5GHz channel.

The WiFi is totally pants on this tablet.

Why does this exist it's so bad.

Yeah can we please Intel Atom x86 back? At the very least it was not this potato...

all famous brand tablet from amazon, lenovo, asus, huawei, xiaomi... is best to buy no matter what they offer! it is because tablet from china like Teclast, Chuwi, Onda, Cube..... all this with fake specifications. almost every app not fully support. easy crash app. THOSE cheap tablet with fake battery stat... YOU GONNA REGRET ONCE YOU TEAR YOUR TABLET APART

Anonymous, 28 Jan 2020microUSB in 2020 = FAIL Snapdragon 450 released in 2017, s... moreChill out dude, this is a cheap tablet. It's not supposed to have top of the line specs. It's also being made by Lenovo, not Samsung or Huawei or Apple or something.

l love this big screen, but the specs are really lousy.

Lenovo, i do not mind paying a higher price with a better storage and ram with nfc.