Yesterday Qualcomm announced that it is switching its Snapdragon chipsets to the “Gen1” style naming, starting with the flagship – the former 800-series has been renamed to Snapdragon 8 and Gen1 will be the first chip to come out (we’ll see it on November 30). But this change affects other chips as well, including the cx line for Windows-on-ARM devices.

Lenovo seems to be working on just such a device – here is a Geekbench result from the Lenovo QRD with a Snapdragon 8cx Gen 3 chipset. 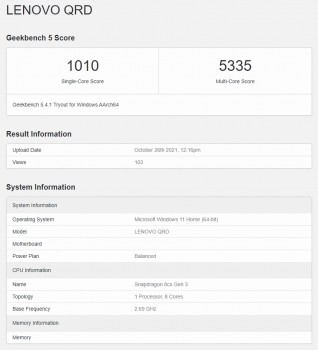 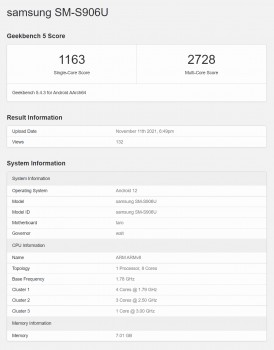 We don’t know much about the Gen 3 design or the QRD. We do know that it runs Windows 11, but it could be either a tablet or a laptop – a followup to the Lenovo IdeaPad 5G perhaps, a Windows 10 laptop from January that used the original 8cx chip to offer always-on 5G connectivity and a fanless design. And we don’t have to tell you why manufacturers such as Lenovo might be interested in a fanless ARM-powered laptop, right?

We also know that the 5,000+ score in the multi-core test is close to double what we’ve been seeing from early Snapdragon 8 Gen1 phone benchmarks. The single-core result is basically the same, suggesting that the 8cx Gen 3 uses the same Cortex-X2 prime cores, but perhaps uses twice as many prime and big cores, dropping the small ones (the total count is still listed as 8).

Also, the tablet-or-laptop QRD probably has better cooling than phones, even if it doesn’t have a fan. The final thing to consider is that cross-platform benchmark comparisons (Windows-Android in this case) are not particularly accurate.

Qualcomm confirms Snapdragon 8 Gen1 name, will unveil it on November 30

This is bad. Macbook m1 has approx 5000 single core 16000 multicore. This is embarassing microsoft windows

It's wide popularity is because it destroyed Mac OS long back on software alone and still continues to do so... The people have made their choice... Do you have think M1 or m1x Macbook can match my Legion 5 pro in any department?