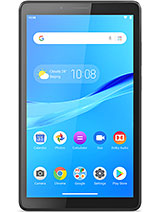 Can I use the 4G-LTE version als a 'phablet' (make phonecalls with it) ?
Lenovo says it does 'Voice Calls' ,but does work everyhwere?
In my country (NL) only the 'SE' version (Swedish) is sold.
There is no NL/Dutch version apparently.
So my question is Can I use this as a smartphone in the Netherlands?

this tablet is ok for me i needed it to read books and manga nad its great for me also as its the only compact tablet available here so its my best choice, just if they could release it with better cpu and it would be great.

Does this tablet support discord chat?

Not the worst tablet in the world, but it's an okay tablet. Good for listening songs or watching videos. The Processor and the battery is terrible. I also have Lenovo Tab M10 HD and it has Snapdragon 429 and it performs incredible. Plus, the 4850mah battery gives it a "tablet" experience. But M7, is okay but it could've been better atleast it should support Android 10.
Plus, I've received a faulty display which doesn't respond when I keep it on a flat or any surface.

The greatest garbage ever built
How is it possible to sell such a terrible device. There is lag even in menus. It is painfully slow. I have a phone from 2014 which is faster. I cant believe how bad this is!!

This is an ok tablet...... But the battery and the prossecor is not the greatest on tablets

Anonymous, 12 Aug 2020how to put sim i dont know pls help me Yo, just poke the tiny dot on the side of the tab with the thing called sim ejection tool and press until the tray slides out. Then you put the card in and push until it closes

Anonymous, 28 Sep 2020Dual sim slot ? No it supports one simcard

Abg, 20 Oct 2020Hey.. How does it performs with 2gb of ram.. I'm plann... moreWork fine. No hiccups what so ever. But i only use for work, internet browsing and watch movies. The reception is quite good.

Definitely the worst electronic device ever. Slow, slower, slowest! So slow that if you using navigation and you receive call, it needs almost 20 secs to switch from navigation to call and bonus +5 sec if you want to put on speaker. In the mean time, caller quits.
To start medium size app...needs 15-20 sec.
Got brand new one, flashed cashe..nothing helps. This device should not be on market at all. Totally disfuntional.
Second...display. Car keys felt from not even a half meter on display. Cracked and it spreads!
Avoid this crap and save yourself from misery, spending money and frustrations.

Who needs a tablet with a screen that doesn't even have hd resolution?! For those who do get a life man!

Well. Mine is 2gb ram and 32gb rom wifi/lte model

Anonymous, 12 Aug 2020how to put sim i dont know pls help me We have to remove the side slot with the pin given in the box there we can see sim slot and card slot

how to put sim i dont know pls help me