The Lenovo Vibe K5 Plus measures 142 x 71 x 8mm, which is right about average for a 5-incher. The Xiaomi Redmi 3 has a slightly more compact footprint, but it is half a millimeter thicker to house that huge 4,100mAh battery. At 142g, the Vibe K5 Plus is two grams lighter than the Redmi 3.

The Lenovo Vibe K5 Plus is built mostly out of polycarbonate, with the notable exception of the metal back cover - a welcome touch on a device in this price bracket. Design is generic, but that can be said of phones several times as expensive, so we won't hold that against it. On the contrary, the K5 Plus looks quite pleasingly simple. 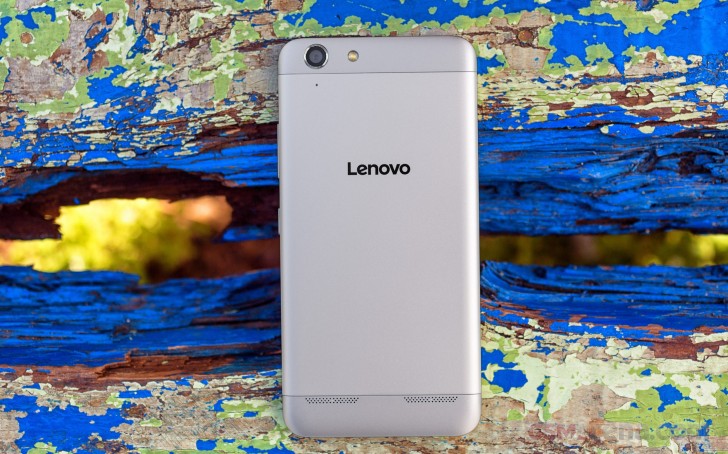 Its back panel has a satin finish, both the large metal part and the two strips of plastic top and bottom. Those are painted a couple of shades darker to serve as an accent.

The camera module and single LED flash peek from cutouts in the top band, while below the lens you can recognize the secondary mic's pinhole. In the bottom band you have two speaker grilles - and there are actually as many speakers underneath.

The cover is removable and comes off together with the sides, buttons and all. Popping it off takes a bit of effort at first so it shouldn't come off by accident, but once you get it started, it's out of the way in an instant.

With the back removed you get access to the battery and card slots. There are three of them, two for microSIMs and a dedicated microSD compartment - a setup we can applaud. And there's the two speakers right below the battery.

Insert fingernail here to pop cover off • Cover, phone, battery - like in the golden days

Flipping the phone around, the FullHD 5-inch screen boasts some generous bezel all around. The entire face of the phone is outlined by a shiny silver-like frame, which serves to protect the edges of the glass, and also as tactile clue where the display ends. It's quite obviously made of plastic.

The bottom bezel houses the capacitive keys, which have icons etched in the white front panel. Above the display there's the earpiece in the middle with the front camera and a bunch of sensors on either side.

With the card slots under the hood, the sides of the Lenovo Vibe K5 Plus are pretty neat. There's the power button midway on the right, the volume rocker above it and that's it - there's nothing on the left.

The bottom is a similar affair - aside from the mic pinhole, there's nothing to be found here. And, yes, that means that the microUSB is on top. It's a solution Lenovo insists on for its budget models, and it takes some getting used to if you've been plugging cables on the other end for a lifetime. The 3.5mm jack is here too.

Microphone on the bottom • microUSB and 3.5 jack up top

The Vibe K5 Plus feels comfortable in the hand thanks to its manageable size and slight curves on the back towards the sides. It's a touch too slippery though, with that smooth satin finish to blame.

The worst phone ever. The quality built isnt represent a big brand like Lenovo. The display starts to fail at three month from new. Today i have a walkie talkie, because the display responds like a glass from the windows. Warranty dont exists. Very d...