LG had a hit with the G4 camera and with some polish, it used it on the V10 as well. Now with further improvements, the camera has landed on the LG G5.

Its basic specs are a 16MP sensor sitting behind a f/1.8 lens with optical image stabilization, Laser autofocus and a Color spectrum sensor.

The big innovation is the second, wide-angle camera. It has 135° field of view, a mini panorama in a single shot. This camera lacks basics like autofocus, let alone OIS. The aperture is tighter too (f/2.4).

Samsung used completely new hardware for the Galaxy S7 edge camera. The sensor packs fairly large pixels and it sits behind the brightest aperture on a phone yet - f/1.7. All this is designed to collect more light, coupled with OIS it makes for great low-light shots. 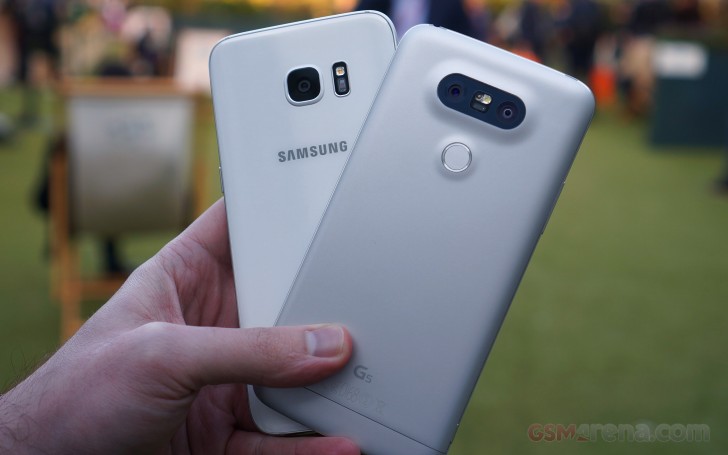 The innovation here lies in the sensor - the Dual Pixel design means the entire surface of the sensor is used to determine focus, a massive improvement over having a limited number of focus points. The S7 edge locks focus faster than anything we've seen before.

Starting off with pixel peeping at shots of the Sagrada Familia, we find that the Galaxy S7 edge captures more detail per pixel. Dynamic range goes in favor of the LG G5, though, the S7 under-developed the shadows. LG's Color Spectrum sensor also did good work, while the Samsung put a warm yellow cast over everything.

The wide-angle camera of the LG G5 captures 135° of the scene, compared to 75° of the main camera. Sure, it's "only" an 8MP camera and its lens isn't as good, but it's brilliant for tourism.

Here's a comparison of just how much more a single wide shot captures. When you get home, it will be more like you remember it and less like a narrow photograph.

Now compare the S7 edge photo with the narrow G5 photo and then the wide one.

So, the LG G5 captures more of the scene, but Galaxy S7 edge's narrower view is sharper. Here are some shots from up close.

You're not a very smart person are you? Have you used both phones for one day straight? Did you shot any photos or watched any 4k movie on them? Definitely no. So shut up and do your homework cuz' you don't know what you're talking about.