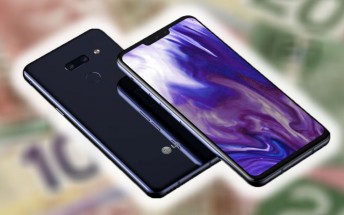 LG G8 ThinQ will arrive at MWC 2019 and so far we know it will have ToF sensor on the front to help the selfie camera for face unlocking and 3D animated emojis. It is also expected to run the Snapdragon 855 chipset and to have the biggest battery in an LG flagship in the last five years. These specs suggest a high retail price and well likely get exactly that.

According to a reddit user, the phone with 128 GB storage will cost CAD1,199 which is slightly over $900. Smartphones in Canada are usually a bit more expensive than in the United States, so the LG G8 ThinQ 128 GB will likely be priced at $899.

LG G8 ThinQ will not have the X50 modem by Qualcomm, despite having the latest Snapdragon chipset. It will be accompanied by the LG V50 ThinQ at MWC 2019 which is said to be the 5G smartphone of the Korean manufacturer.

Other rumored specs of the G8 ThinQ include a tall notched screen, dual horizontal camera on the back with a fingerprint scanner below. There will be a 3.5 mm audio jack next to the USB-C port and the speaker. Like its predecessor G7 ThinQ, the volume button and power key will stay on the right, while there will be a Google Assistant trigger on the left.

There's nothing wrong with buying flagships if you want the latest and greatest hardware and software features, if all you care about is a decently fast phone that does everything you need it to do then any basic phone above $250 will suffice these d...

This comment heavily applies to Sony too, both companies need to stop being arrogant and cocky with their prices.