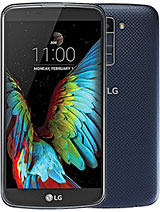 lg user, 21 Sep 2021i use my phone for 3 years and now its start flickering its... moreI'm amazed that you put up with this phone for so long, it barely lasted 3 years with me before I went for a Galaxy s10e which is still doing ok after 2.5 years.

i use my phone for 3 years and now its start flickering its screen till it goes dark. my notifications are still running but my screen does not. what should i do to this one?

On the LG K10 specs page, "battery capacity" is given in mAh. But 2300 WATT-hours would be absurd (a hundred times more than expected) so I think what you have there is the charging current (ie mA). It's not really possible to get the true capacity of the battery by multiplying that by the charge voltage (about 4 volts), since some of the energy is lost as heat.

It is incorrect of GSMArena to describe the 2300 mAh number as "capacity". But it's a fairly minor slip-up considering manufacturers generally don't claim a total capacity. Li-ion batteries lose capacity slightly (whether charge-cycled or not) from the moment they're manufactured, so if the phone manufacturer cited any capacity (other than a very low one) then any phone that was delayed from manufacture to retail sale, could be tested and returned for battery replacement under warranty. It's perfectly understandable that they avoid that, but not very honest to publish the charging rate as the capacity of the battery.

In LG's defense, at least this phone has a removable battery. So the buyer can test a new battery for themselves, without breaking their warranty.

BTW, I'm not a qualified expert. Just a hobbyist with a grasp of the basic equations.

Have to say, for the price this is kind of impressive

VK, 12 Oct 2020Please give an update for the software version of lg k10(m2... moreUnfortunately, the only way you can update this phone is as if you are connected to its carrier. You have to be logged in onto the AT&T app if you're using the AT&T version of it.

VK, 12 Oct 2020Please give an update for the software version of lg k10(m2... moreyour phone is an fake phone it have not ram and it have not space in it's internal store,

Please give an update for the software version of lg k10(m216) .....its my humble request

AKW2020, 18 Mar 2020Hey GSMArena team please bring back Card slot Micro SD limi... moreOh i wrote wrong, spec sheet*. It was 32GB MicroSD MAX Limit, These Info are important for old phones, btw most/all of new phones Either they do not support or they support 1/2TB, Thought if I'm not mistaken 32GB of 32GB+ MicroSD works ig. Thanks

It is an ok phone, do not expect too much in terms of gaming the surfing experience is mediocre.

I did a factory reset of my phone, but now it has found some bugs. Can anyone help?

I did a factory reset of my phone, but now it has found some bugs. Can anyone help?

Been using it for 3 years. Still works well. Only downside would be the battery life. But overall, very nice phone.