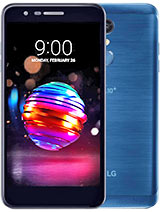 Anonymous, 13 Dec 2018Honest suggestions please.. should I buy this phone? Lg k10(2018)I have the K10 2017, its a good phone, the camera isn't as good as other phones and the speaker is on the rear near the bottom, cup your hand to hear videos better. For the money it's a good phone and I recommend it.

Anonymous, 09 Aug 2018Basically, this is the same model as K10 2017. And i have 2... moreWhat problems? Could you tell me? A relative bought k10 2017 2 weeks ago. They will blame me for potential problems although they chose it without my help.

Basically, this is the same model as K10 2017. And i have 2017 model for 9 months, and i regreat buying it, even at discount price. all hte problems you can see for 2017 model, i have it. Not all of them from the begining, but gradually , one by one, problems start popping up, batery consumption is the worst. Don't buy this phone

Increased the battery by less than 7%, not going to make a difference in daily usage versus the 2017 version.

Still the same camera that sucks at focusing, same display that lacks brightness in sunlight (can barely read anything), same feature strip for developing markets, same CPU that lags when swapping between browser and email, same atrocious body to screen ratio that near every other device beats.

LG has lost the plot.

LG k-series shouldn't be even compared to Samgsung Galaxy S-series! S-series are flagship smartphones. LG's flagship series is the G-series (G6 and similar).

USB modem to the desktop internet is terrible 4g is not even turning on and many disconnects. on my older model.

LG is keep using back power button..
it is so uncomfortable.
why LG is not listening to consumer.

Anonymous, 22 Feb 2018the specs are a joke especially screen resolution and the c... moreThis phone ram is 3gb with 720p
It should be fast as galaxy s6

First of all, before you get it ask for a case, skins in the local shop if they don't include that go away, protection for your phone is important and see some tear downs and durability tests compared to Nokia 7. Dont make same mistake like i do. i can not even make a call whit LG phone anymore. Now their old models costs 80-50 euro cheper.