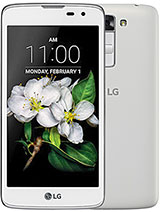 The phone is very slow it dosnt keep battry long

It a very nice phone
But it has insufficient space

This phones doesn't leave much available storage to download a lot (I was able to download FB, Twitter & Outlook), however, if I want to download something else, I have to uninstall one of my other downloads and because so much of the storage is filled with pre-loaded apps, I don't have room to allow the updates without having to uninstall the apps I downloaded. BUT, it's great for text messaging and phone calls.

mp, 09 Aug 2019Where i can find the flash light From top of screen, slide finger down. When box comes with brightness, sound. & icons above that, slide to left to find flashlight! (At least, that's where mine is on same phone.)

Where i can find the flash light

I have an LG K7 that is locked and can't use GSM sim sim cards, how do I solve that?

Anonymous, 14 Dec 2018My battery went dead and it wont turn on again :( even afte... moreIt has a removable battery so maybe just buy a new battery?

Also got the SUN rew, 31 May 2018This may be the wrong page for you to look into since i als... moreMy battery went dead and it wont turn on again :( even after charging. I brought it to the repair shop but still not working

A best phone, I've ever used. This phone with 1gb plays so heavy games that my 3GB phone couldn't even start. The War & Order and Coverfire (both are more that 1.10 GB games) are my favorite but this phone never left me diappointed.

I recommend this phone for any one who can't afford a Flagship.....

Cocoy, 22 May 2018just got my LTE Sun Sim and a new LG K7 as loyalty award...... moreThis may be the wrong page for you to look into since i also got the SUN subscription reward and chose to get the LG K7 but the one they usually give away this year (2018) are the LG K7 2017 edition which is a different unit with different specs

just got my LTE Sun Sim and a new LG K7 as loyalty award...no ratings yet...

Wish it had at least 2 RAM

LULIMASTER, 11 Nov 2017used for updates It reserves space for updates, RAM and usually drops in performance of your CPU.

my phone is LG K7 LTE.it really gives me a best 4G network.it has a trending eye catching glossy pebble design, and also it gives a fast performens with its snapdragon 210 prossasor and a better comparable cameras.+ best UI and. Good features.I love my K7...thanks to LG