T-Mobile has a habit of posting future smartphones a bit too early. In this month, T-Mobile has posted a couple of mid-range devices (Moto E5 Play and E5 Plus, Samsung Galaxy J7 Star) to its support pages, all of which support T-Mobile’s latest 600 MHz band for better and stronger signal.

Today, a new device was spotted on T-Mobile’s support site by TmoNews. The LG Q7+ is expected to hit T-Mobile very soon with support for the aforementioned 600 MHz frequency (band 71). The Q7+ is an LG Q7 with higher RAM and storage (4GB + 64GB). 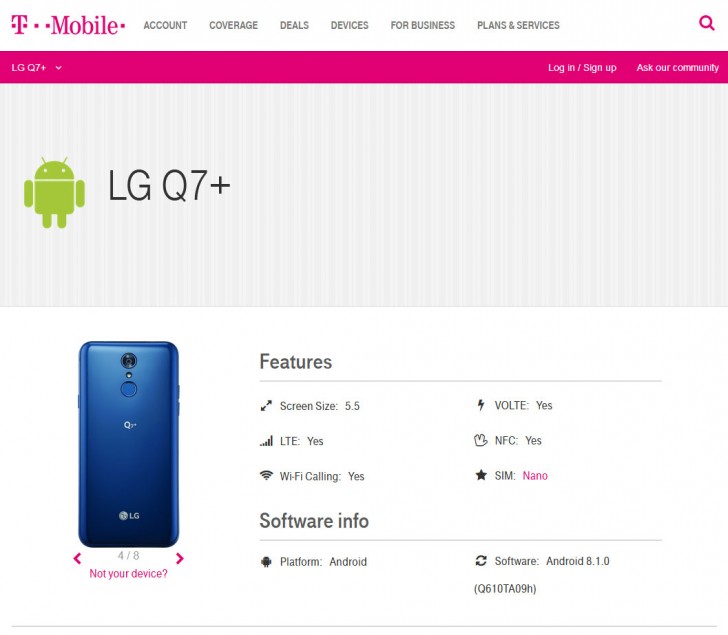 There’s a 5.5-inch display with FHD+ resolution so it’s of the taller variety. There’s a 16MP camera with an 8MP selfie shooter. Also on board is a Qualcomm Snapdragon 450 CPU and Android 8.1 Oreo. NFC is also supported for mobile payments and the phone is powered by a 2,890 mAh battery. Finally, the device is IP68 dust and water resistant just like the LG G7 ThinQ.

The phone isn’t listed as a smartphone that the carrier sells, but we expect it to become available pretty soon. Once it does, the final retail price would be revealed by T-Mobile. Head to the Source link for the device’s full specifications.

Moto E5 Play and E5 Plus becomes available from T-Mobile

Nokia and T-Mobile announce a $3.5 billion deal to build the carrier's 5G network

When its lounch in india

If you click on the source, specifications, you will see that you are wrong. Processor1.8GHz Octa-Core Qualcomm Snapdragon SDM450