For many years now there's been speculation of "flexible displays" coming to smartphones. In 2013 we even saw the first two devices to come with curved screens (though you couldn't bend them yourself): the LG G Flex and the Samsung Galaxy Round.

Those served as a showcase of what was then possible in terms of display technology, but as you'd expect things won't remain that way in the future. The mobile world moves at a breakneck pace, and so too will the display tech in the years to come. At least if LG Display's newest roadmap pans out. 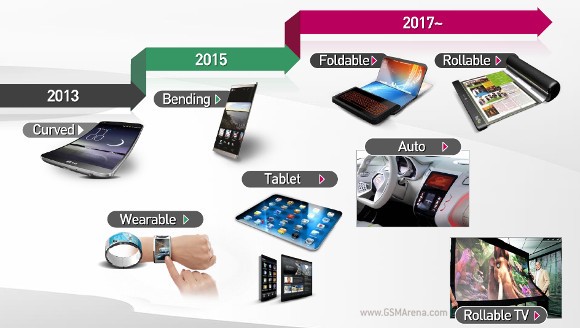 The screen-making arm of LG wants to use P-OLED technology to create bending, foldable, and rollable displays by 2017. P-OLED uses a plastic substrate unlike other OLED implementations that use glass. LG says P-OLED results in simpler, thinner, and lighter screens compared to glass OLED as well as LCD. It also makes for panels that are a lot less prone to breaking.

And the company is clearly excited about P-OLED and its potential "to play an important role in people’s everyday lives in the future". Speaking of which, the LG G Flex will apparently be followed up next year by a smartphone with a screen that you'll actually be able to bend.

And then, sometime in 2017 (or later - keep in mind that release time frames for stuff like this usually get delayed), we should see foldable displays for laptops and rollable ones for tablets and TVs. Before that, the P-OLED tech should make its debut in 'normal' tablets, probably in late 2015 or 2016.

Don't they flex display to fit the curved screen? G Flex sports a Curved (flexible) P-OLED below a a curved (and flexible) body. Round has a curved (non-flexible) body on top of a Super Flexible AMOLED display. Aren't we discussing about displays her...

right!!! relax ok, this is just for fun man. ibendy like tech. major lawsuit closing in...