The LG V10 comes with a box suitable for its flagship status. It looks ordinary, but when you take out the inner box, it opens like a book - one half holds the V10, the other contains the accessories.

We start with a Quick Charge 2.0 charger, which will rejuvenate your battery from flat to 50% in 40 minutes. There's a microUSB cable to go with that. Also, our unit came with a pre-applied screen protector that has no visible markings and you can just leave on the device.

The retail box gets you premium headset and a fast charger

The Quad Beat 3 headset provided with the LG V10 looks pretty great. The cables are hidden in fabric sleeves while the ear plugs, the remote control, and the 3.5mm jack have a brushed metal highlights (it's actually plastic). This particular color combo is white fabric and golden faux metal, other Quad Beats are usually Black or Red.

This seems to be exclusive to the LG V10 for now and better yet, this headset has been tuned by AKG, a company known for high-quality headphones. The V10 also has a high-quality DAC to drive these headphones, but we'll get to that.

If you were hoping for some LG bezel magic, the V10 doesn't deliver. It fits well enough in the hand for its screen size and given its size the weight doesn't feel overwhelming. Still, it could have been more compact and a lot lighter.

The LG V10 is an exercise in rugged design and premium engineering. The chassis, which LG has dubbed Dura Guard, is built out of 316L stainless steel (which is harder and heavier than aluminum). Stainless steel is covered with chromium oxide and when scratched, the chromium underneath reacts with oxygen from the air and heals the scratch, preventing further damage.

The second part of the equation is Dura Skin, an elastic, silicone-like material that is twice as resistant to scratches as plastic and 10x better than aluminum.

The LG V10 looks more rugged than the G4

The LG V10 is shock-resistant, living up to this particular part of the MIL-STD-810G standard. Analysis of real life drops showed LG that nearly half of all phones land on their corners. There are silicone bumpers to absorb the shock. Furthermore, the rigid steel frame does not flex, which prevents the glass from cracking. On other phones, the frame can flex more than the glass, causing it to crack. 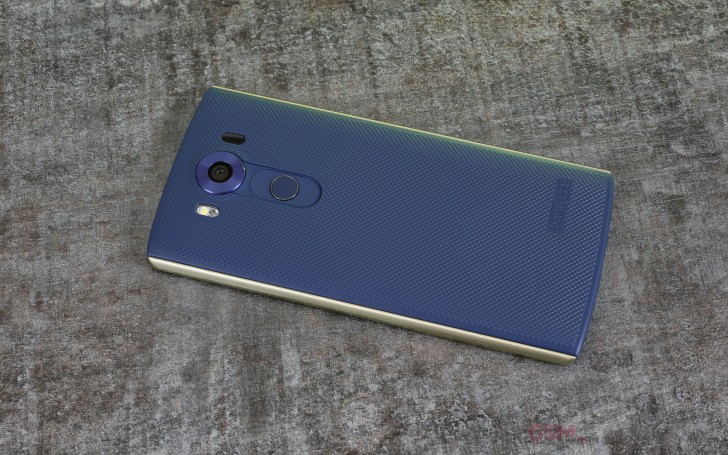 This leaves direct hits to the glass - LG calculated that 26% of the phones will land on their faces and the Gorilla Glass 4 panel is their last line of defense in these cases. LG has provided the V10 with a dual-layer Gorilla Glass 4.

The screen below that GG4 is a 5.7" Quantum display. It has a fairly unique configuration, though - the secondary line display is actually part of the same panel, but LG cut off the top right corner to make the two selfie cameras.

It's not as simple as that, though, the line display actually features its own display controller and backlight. This keeps power usage low, enough to leave the secondary display on 24/7. We can't help but think this would have been simpler with an AMOLED display, but still kudos to LG for not shying away from an engineering challenge to bring us cool functionality.

A closer look at the second screen

The dual-cameras on the front are a unique feature too. One is used for relatively tight selfie shots (80°) and one for group shots (120°). Samsung does it another way - Wide selfie is similar to panorama mode and much slower than a single shot. Again, LG could have used a single high-res, wide-angle camera and cropped for the narrow shot, but went with the more challenging solution.

There isn't enough room here for the traditional proximity and ambient light sensors, they are moved up next to the earpiece (the little black window that's more visible on the White V10 than on the Black one). Below the screen there's nothing but the LG logo, the keys are on-screen.

The centered back buttons now feature a fingerprint reader

The main camera is surrounded by a textured metal ring, which is an attractive design element, but doesn't do much to protect the glass. To the right of the camera is the Laser autofocus module, to the left the LED flash and the color spectrum sensor.

The phone has a microUSB 2.0 port on the bottom, which supports Quick Charge 2.0. There's also a 3.5mm audio jack here, connected to a 32-bit Hi-Fi DAC and the sole loudspeaker.

The microUSB port and 3.5mm audio jack, plus the sole loudspeaker

The LG V10 features a total of three mics, which are put to good use in a unique feature - control directionality. You can manually adjust whether the phone captures sounds ahead of it and ignoring sounds from behind (if you're playing the role of a quiet videographer), the other way around (to capture your narration and mute the noise from the scene) or any balance between the two. There's wind noise reduction too.

The Dura Skin back cover is removable, giving you access to the 3,000mAh battery, which can easily be swapped out. While you're here, you can pop in a microSD card for extra storage (you get 64GB built-in to start you off).

You get full access to the battery and a microSD slot

The LG V10 is an engineering tour de force, the company built what it envisioned rather than what was possible. Pushing the technology limit is certainly impressive to us geeks, but the features enabled by this complex solution will impress everyone else too.

In the hand the V10 feels big, though manageable. As we saw earlier, it's on the higher end of the size spectrum for a device with a 5.7" screen and the stainless steel frame contributes adds extra width, which does have an effect on handling. Adding in the weight, it's not the most effortless phone for one-handed use, but you quickly adapt to it (especially if you have experience with large phones).