The LG V40 ThinQ is the first phone in the world that lets you take an ultra wide-angle shot or zoom in, thanks to the three cameras on its back. From the 107° ultra wide lens, through the 78° main lens to the 45° telephoto lens, the new flagship covers 3x worth of optical zoom (the lenses are 16-25-50mm in 35mm equivalent).

The main camera features a 12MP sensor with 1.4µm pixels, significantly larger than the 1.0µm pixels of the LG G7 and V35. It comes paired with a brighter f/1.5 lens and Optical Image Stabilization, so low-light performance should be much improved. This is the first LG camera to offer Dual Pixel autofocus.

The other two cameras on the LG V40 ThinQ allow you to take an all-encompassing shot or zoom in closer. The latter is handled by the 12MP tele camera with f/2.4 lens. The 16MP ultra wide-angle module has been borrowed from the G7.

All three rear cameras feature digital image stabilization for video along with HDR recording. The top video capture mode is 4K at 60fps and there’s a 1080p at 240fps mode for cool slow-mo shots.

Also, you can take a photo with all three cameras (almost) simultaneously with the Triple Shot feature, which will create a video or a GIF out of the three images. There’s naturally an AI engine that will help you compose your shot. It recognizes people in the frame and will guide to a perfect “rule of thirds” composition.

While the V40’s heart is its camera, it has much more going for it. With the 6.4” FullVision display, the V-series has regained its size advantage over the G-series. It’s a QHD+ OLED panel with HDR10 support and a 19.5:9 aspect ratio. And it has a notch. 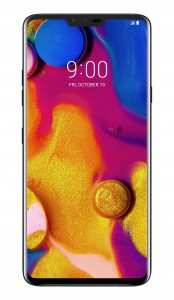 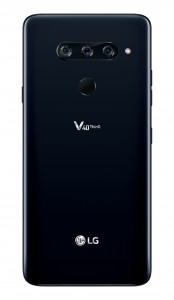 The LG V40 ThinQ lives up to its legacy with the full complement of IP68 rating and MIL-STD-810G certification. All that and at 169g, it’s significantly lighter than the Galaxy Note9 and iPhone XS Max. It’s only a few grams more than the smaller G7 and it’s actually a tenth of a millimeter thinner than it.

LG still believes in wired headphones, perhaps because of the 32-bit QuadDAC provides a sonic boost that not all Bluetooth headphones can match. The phone also boasts a BoomBox speaker (sadly, just the one).

The V40 runs Android 8.1 Oreo (with LG's custom launcher on top) on a Snapdragon 845 chipset with 6GB of RAM. There's a single storage option: 64GB. The good news is that LG is keeping the microSD slot alive.

The battery capacity is 3,300mAh, on the small side in this class. But the V40 supports fast wireless charging, a first for LG. The wired option is QuickCharge 3.0.

The LG V40 ThinQ will be available from October 18 in Aurora Black (polished finish) and Moroccan Blue (sandblasted). Its starting price is $900. You can find more about the pricing here.

I hope the V50 will avoid a notch. Apple needs to hurry up and remove notches from their phones too.

I wouldn't say least. But they had some issues for sure. However the v30 seemed to really take care of most of it

In my experience, LG is the least reliable company. Each and every LG i ever owned eventually presented mulfunctions. The G2 was exceptional, esp its battery, it took my ears to find smth to top it. To my understanding, they are still haunted ...