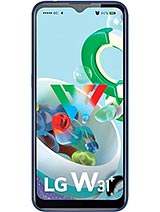 dolomenaxe, 25 Jan 2021lg is just being slept on and criticized rn i hope they don... moreMe too!
LG has something that lacks in other phone models..Unique UI, with most features inbuilt rather than downloads from play store.other brands are so basic you cant tell the difference between oppo,samsung,tecno,xiaomi till you see the logo.but not lg

last time LG produced a living phone was with velvet.since then we have moved back to stone age.We now see thicker lg phones(over .32mm),something that was never there before, we see phones without gorilla..i cant imagine the last time i bought LG without gorilla protection..UI interface is still the best on earth but designs are awkward like iphones'.hard to convince someone that W31 is a 2021 phone!rather go back to G3!

This phone isn't that great. It's kind of awful, well, it is awful, because the video isn't that good, RAM is okay at least, megapixels too low, and the milliampere (mAh) is good. At least it is more than the iPhone 12 Pro Max I'll tell you there. But honestly, I wouldn't recommend this phone if you're into games, video chatting, etc.

Anonymous, 28 Jan 2021LG Velvet is technically the LG g9I think they are worthless

lg is just being slept on and criticized rn i hope they dont stop making smartphones man.

Where is LG G9? is LG gave up? While Google and Samsung getting greedy it is time right time to step in

Phone is good but battery could be more better as 5000 mah.

Wanna this lg to matcht with my lg led 65inch tv

It seems most of their 4G phones have Helio P22 or P35, yikes

Imagine being an actual mentally functioning human and buying this over the Poco M3. I couldn't imagine it. Could y'all? No? Thought so.

cpcopccp2333, 24 Nov 2020g series is not good enough as flagship,such as g8 or g8s,b... moreG series were they flagships tho
I'd understand if they decide to stop with G and use a different name instead but i don't see any other flagship series
The only one that come close is the V series

What exactly is LG doing? Did they go the way of HTC by dropping the flagships and just making mid rangers?
LG phones were my favorite at one point and even preferred them over the Samsung phones but after 2017 they stopped selling in my country and after 2019 they stopped with the G series.