Logitech has announced two new accessories for the newly announced Apple iPad. Both accessories are designed for school students keeping with the theme of the new iPad. 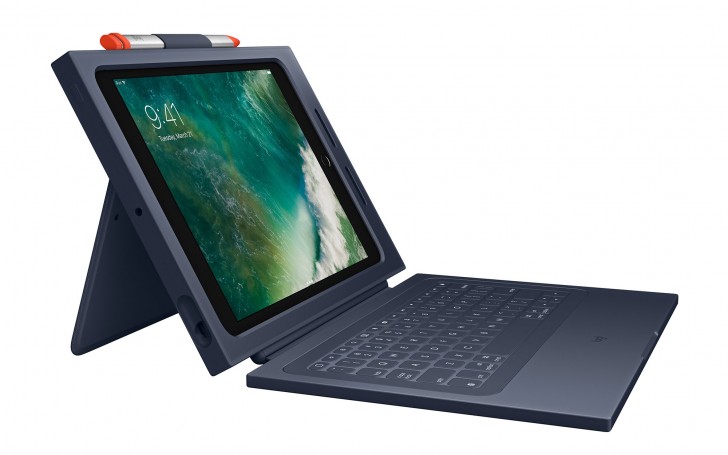 The Logitech Rugged Combo 2 is a rugged case designed for students from K-12. It is designed to protect the iPad against bumps, scratches and drops from up to 4 feet high.

The Rugged Combo 2 has a detachable keyboard layout with pry-resistant keys that don't require replacement. The keyboard attaches via a proprietary connection to the case and features shortcut buttons for things such as volume, brightness, media playback, camera, dictation, Spotlight, Home and Power. The keyboard has a spill-resistant design and is silent so as to not disturb other students.

The case has a built-in kickstand that can prop-up the iPad at various angles and four viewing modes: typing mode, viewing mode, notebook mode and travel mode. It also has a holder for attaching the Logitech Crayon or Apple Pencil.

Speaking of Crayon, it is the first third-party stylus for the iPad that features the same technology as the Apple Pencil. This means the Crayon will work just as well as the Pencil within all the supported apps. Like the case, the Crayon also has a rugged design that should survive better with the kids than the dainty Apple Pencil. It has a battery life of 8-hours and can last a full day of use.

The Logitech Rugged Combo 2 and Crayon are priced at $99.99 and $49.99, respectively, and will be available for purchase to schools and school districts in the US starting this summer. At half the price, the Crayon is a great alternative to the Apple Pencil, if you're okay with the chunkier design.

What to expect from Apple's March 27 event

Apple will go after educational market with cheaper iPads next week

Because Apple refuse to have mouse support.. YET decided to give it keyboard support. Problems: 1. User have to remember tons of keyboard shortcuts. 2. User have to stop typing, raise their fingers, pickup a stylus / or touch the screen.. OK, b...

The crayon - I guess the iPad has finally hit it's target audience.

I have moved out of iPads long due to some obviously missing features such as call option, WhatsApp support. Moving your hands and fingers in the same planar is much intuitive and unobstructed than moving your hands in multi- dimensions affects ...