Microsoft has been rapidly shifting strategy lately, writing off the Nokia acquisition and taking a lot more conservative approach for the next generation smartphones. Still it seems the company will not cancel any phones that were already in development when the strategy change happened.

Microsoft is expected to release one of two phones annually in three different categories - flagship, business and value. Yet this won't happen until next year at least. 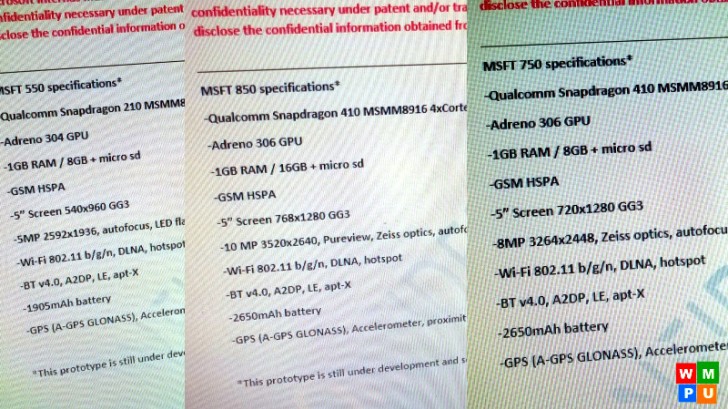 All three phones are protected by Gorilla Glass 3, lack LTE support and dual-band Wi-Fi, and run on Windows 10 for Mobile.

Microsoft has an IFA event coming up on September 4, but it will focus on Windows tablets and PCs.

There is a good chance though it hosts another press meeting to show off some new Lumia phones, too. The rumor has it Microsoft will be launching the Windows 10 Mobile updates starting October, which means the Windows 10 flagship phone should be upon us.

These leaked specs are piece of s*#% now that we are aware of the 550 real specs; sporting smaller screen, better definition, better battery... Be sure that today's leaked 850 will never be released with a low end sic, hd screen and 1gb of ram (: