A couple of days ago we showed you the first purported images depicting an upcoming mid-range Nokia smartphone. As this is supposedly going to serve as the successor to the Lumia 820 from 2012, we assume it will be called Lumia 830.

Now it's been spotted in a brand new leaked render, this one courtesy of Chinese search engine Baidu. 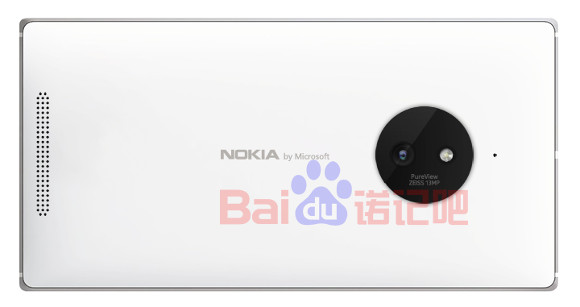 The most intriguing thing about it is obviously the new branding: Nokia by Microsoft, as you can see.

As recently as last week it's been rumored that something like this would happen, and in the leaked image above we get our first confirmation of sorts.

So the consequences of Microsoft purchasing Nokia are going to slowly start showing up. One wonders if there isn't a plan to gradually phase out the Nokia brand entirely - maybe in a year or two we'll see Microsoft's name on smartphones by itself.

Until that happens, though, let's focus on the Lumia 830. The new picture tells us that it will have a 13 MP rear camera with Zeiss optics. Previously we heard that it would also sport a 4.5-inch touchscreen, but everything else about it is still a mystery.

Although Nokia has vast area in smart phone and budget phone market but the thing is nokia has evolved since 1su generation of mobile phone making . But apparently microsoft is a software who is not expertise in mobile phone division has renamed micr...

i love nokia phones better the all