Benchmarks of the new iPad Pro (2021) tablets keep rolling in – earlier today we saw the slates blow past the competition in Geekbench, now the AnTuTu team has published the scorecard from their benchmark. AnTuTu tests not just the CPU, but also the GPU, the memory and the overall software performance.

The tablet under test, an iPad Pro 12.9 (2021), was equipped with 16GB of RAM and 1TB storage. A direct comparison with a MacBook Air (also powered by the Apple M1 chipset, of course), shows that the laptop is slightly faster. Note that it only had 8GB RAM and 512GB storage. Also note that the laptop ran the iOS version of the benchmark. 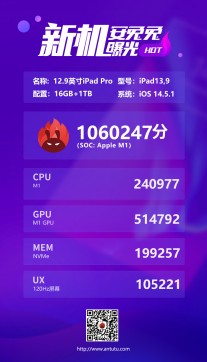 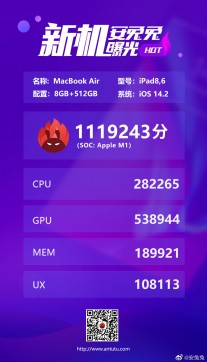 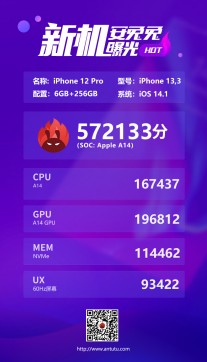 Anyway, both devices have only passive cooling for the chipset. Still, the laptop did a better job of it and the benchmark shows an advantage of around 17% in CPU performance, the GPU is marginally faster. The memory score is lower, but that’s due to the lower capacity of both RAM and storage.

Compared to an iPhone 12, the new iPad Pro is significantly faster in almost all categories (only the UX score is close), no surprises here. The Apple M1 and A14 chipsets use the same CPU and GPU cores, it’s just that the M1 has more of them – four big CPU cores (vs. two), four small ones (vs. four) and eight GPU cores (vs. four).

How much the refresh rate of iPad screen