MediaTek unveiled the Helio G35 and G25 chipsets, which are aimed at gaming smartphones though more specifically gaming phones that cost $100 or less. With that budget in mind, here’s what the two chips offer. Actually, it’s more like different bins of the same chip.

The GPU is a PowerVR GE8320 from Imagination, running at 680MHz. MediaTek’s HyperEngine dynamically adjusts the CPU, GPU and memory based on thermals and power draw. This GPU was also used in the Helio P35 chip – you can sneak a peek at the Performance section of our Infinix S5 Pro review (which uses the P35). 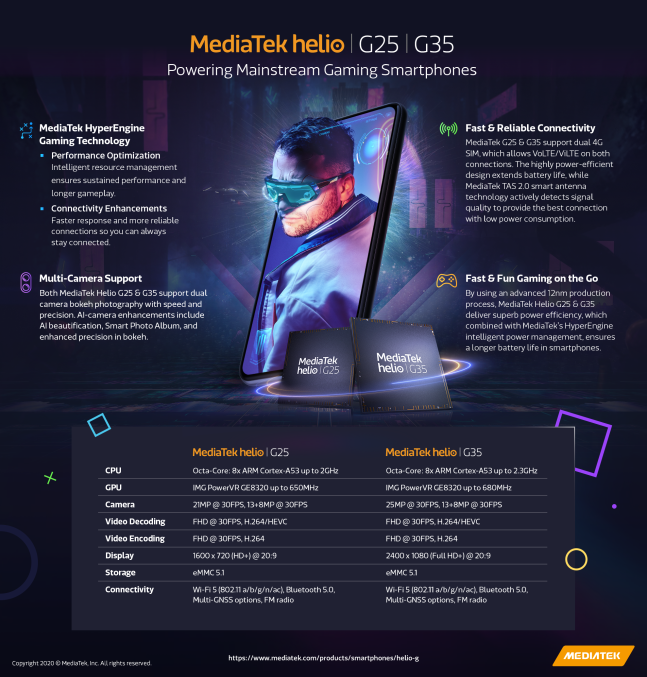 In terms of connectivity, both Helio chipsets are equal. They can do VoLTE and ViLTE on two 4G connections. The HyperEngine can switch between Wi-Fi and LTE in just 13 milliseconds to maintain a fast, stable connection (that’s important for multiplayer games).

Locally, Wi-Fi 5 (ac) and Bluetooth 5.0 are supported and there’s an FM radio receiver.

The Realme C11 and Xiaomi Redmi 9C use the Helio G35, the Redmi 9A picked the Helio G25. All three phones cost under $100 and will be coming out in July.

It not even handle 25 fps properly

why are you spamming the comments with 5 different names