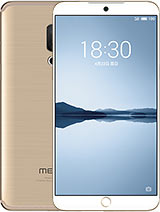 Anonymous, 10 May 2018Meizu 15 plus or Huawei mate 10 (non-pro) I had Huawei Mate 10 (non-pro) but sold it after using it for 1 week. The phone was too heavy and the UI is not as fast as phones with SD835. Battery life was good but not as as good as other phones with a 4000mAh battery. The camera on Mate 10 is very good but not best in class. I also did not like EMUI.

1 year ago I owned Meizu M3 Max, it had a crappy chip (Helio P10) and poor camera but the design and build quality was fantastic. I also like Flyme quite a lot. I will probably buy Meizu 15 Plus in a couple of months, I think the design is better than Mate 10, the camera might also be superior thanks to the 1.55um pixel size in the main sensor.

I would never buy a phone that was 78 mm wide, not when Samsung can give me a similar size display in under 70 mm. I can't see the point of a really wide phone unless you use it frequently in landscape mode, like a tablet.

I think this is a really nice design. It is a far better design over the many inspired by phones out there. I don't mind some bezels, it gives my fingers a place to rest without accidentally pressing something. As for the specs, well that's actually as good as it gets I believe. Meizu historically has been using affordable SOCs such as the Mediatek to lower it's costs. Therefore having a model that use SD 660 or an Exynos 8895 is a big step up. In any case I like where Meizu is heading, and its a step in the right direction. This is evident by the fact that you cannot find the Meizu 15 plus in stores both in B&Ms or online stores in China.

Anyone knows where you can buy this ?

Bravo for the real deal (16:9 ratio) big phones are used for videos.
Everything is good on this phone exept the battery and the amoled. Lcd is more beautifull and as steve jobs said lcd has more resolution and detail than amoled. Also amoled has fake colours. People seem like wearing makeup. And the battery... I hope everyone follows the trend of xiaomi mi max 2 carying a 5300 milamp battery. This one could at least have a 4500 or 4200 cause it has a bettter resolution 1440p.

AnonD-741475, 01 May 2018Why 16 : 9 display dimensions?Meh, typical people who aren't tech junkies would say that. 18:9 aspect ratio is definitely the future for smartphone displays, but I would say that brands did it way too early; they should have stick to the 16:9 aspect ratio still instead of changing it to 18:9 aspect ratio. Most content on entertainment apps like YouTube support 16:9 aspect ratio, having a 18:9 aspect ratio display smartphone would only result in big black bars that looked like big ass bezels, even so when those users fill-in the display by zooming in, cropping the video, they aren't getting the full experience (It will only result in more blurry videos as compared to not filling-in), but those users will only be getting the cropped experience. Think, if 16:9 aspect ratio is still widely used for content, why not stick to that? This smartphone is almost as big as the GALAXY S9+ (Because the 6.2" 18.5:9 display of the GALAXY S9+ is almost equivalent to a 5.7" 16:9 display smartphone, a little bigger than the MEIZU 15 PLUS), but because this smartphone is using a 16:9 display, it doesn't require the user to fill-in, whereas the GALAXY S9+ needs to fill in, if it didn't fill-in it the video would look smaller than it is on this MEIZU smartphone. And with the help of the 16:9 display of the MEIZU, it is able to make use of the whole display with small bezels, and enjoy the full experience. I actually prefer brands to stay with the 16:9 aspect ratio, because it is possible to have a bezeless smartphone with a 16:9 aspect ratio display, plus with the majority of the content out there still being 16:9, u are getting the advantage here. 18:9 aspect ratio will only work well if majority of the content out there supports it, and this is why I say brands should have waited for a few years before putting 18:9 into their smartphone displays

16.9 is most common video format. If you watch full-screen on your phone it fits perfect.

Lead2XL, 23 Apr 2018This phone is waaay too wide!! Compared to Galaxy S8 and S9... moreI've been trying to understand why any OEM would offer a phone that is 78 mm wide. I can only think that it must be targeted at users who use their phone a lot in landscape mode. Great for them I assume but not for me.