Earlier this month a rumor claimed Meizu would unveil the M1 Note 2 (or M2 Note) on June 2. And now the Chinese smartphone maker has actually scheduled an event for that date, so it looks like the successor to the M1 Note may get official sooner rather than later.

The M1 Note itself is barely a few months old at this point, and it will only go on sale in India on May 20, but for whatever reason Meizu is already working on a refreshed model. This has allegedly been caught in the live image you can see below (where the yet-unannounced handset is on the left, sitting next to a Meizu Mx4 Pro). 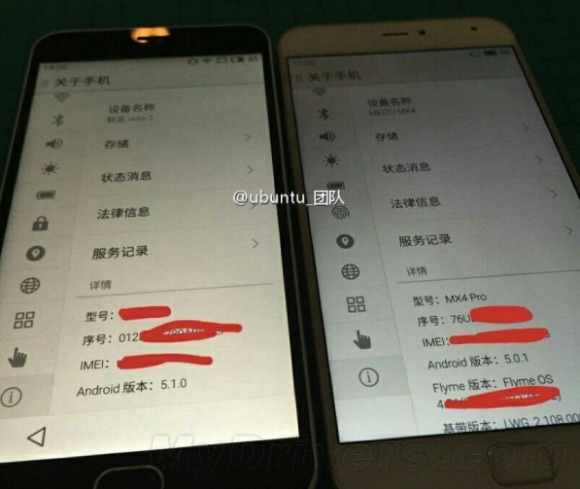 The M1 Note 2 has long been rumored to sport a fingerprint sensor, and the shape of its physical Home button also points to something like that. But according to the software on this leaked prototype, that's not the case - there simply isn't a fingerprint scanner in there.

So it looks like the new Home button is simply a design change, with no new functionality baked in. Therefore what hardware changes the next Meizu Note will bring is still pretty much a mystery. In terms of software, though, we can see that it's going to run a version of Meizu's Flyme OS based on Android 5.1.

One thing that reportedly won't change is the price. The source of today's leaked image claims the M1 Note 2 will start at CNY 999 just like its predecessor. That translates into about $161 or €141 at the current exchange rates.

I just hope all these devices,low cost,highly affordable yet decently spec'd with beautiful battery life,would all make entries into the African markets.,cus so far,all I've been hearing is India,India and India...I think its a nice device which real...

silly meizu they doesn't have a pure overview about their M1 note as we don't get clear info about its performances n quality too its very difficult to trust on brands like meizu as they r less popular in market!!!