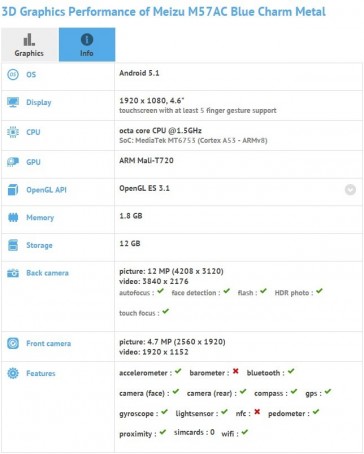 Meizu may be working on a compact alternative to its 5.5-inch m1 metal, judging by an entry into the GFXBench database. Unlike the potential OnePlus Mini from yesterday though, the metal mini won't be packing the same punch as its big-screened brother.

The Meizu M57AC Blue Charm Metal, as it's called in the benchmark result, is in fact the name of the proper Meizu m1 metal, and we would have dismissed the listing if it wasn't for the different chipset. This apparently new device comes with a Mediatek MT6753 chip, while the large model enjoys the more powerful Helio X10 (MT6795).

The alleged metal mini should come with a 4.6-inch display of FullHD resolution, coincidentally the same as yesterday's OnePlus Mini. The specsheet goes on with 2GB of RAM, 16GB of storage and a 13MP camera with 2160p video recording, but that last bit is definitely a mistake, given that the chipset doesn't support it.

The specs are also quite different from what we're expecting to be the Meizu PRO 5 mini. That one is rumored to feature a 4.7-inch display, the Helio X20 powerhouse and 3 gigs of RAM. Let's hope that Meizu doesn't give up on it, for the sake of mini-flagship lovers.

those who r commenting on its os looks like other Chinese os then i think they have never used flyme os before. its a clean and beautiful os with nice animation and transitions with cool and colorful icons. in terms of performance its l...

He must be trolling, a bad one. Or no clue what he is talking about. Just ignore him lol