Meizu is apparently going to launch the Pro 6s by the end of October, if we go by past information. And as that time frame quickly approaches, we should be seeing more and more leaks and rumors about it. Today we have a good start, with a couple of live shots of the smartphone showing the AnTuTu benchmark app's information screen.

That obviously reveals most of the specs for the Pro 6s. The device has a 1080p touchscreen, 4GB of RAM, 64GB of storage, and it runs Android 6.0 Marshmallow. The most intriguing tidbit here is the SoC used, which is reported by AnTuTu as being the MediaTek MT6796. 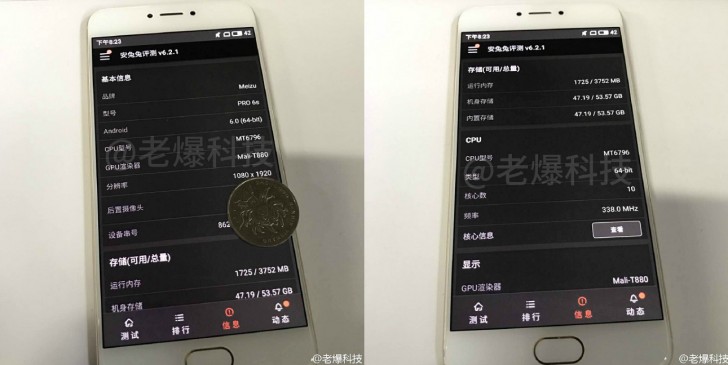 This is a new part number for MediaTek, so we can't be sure what it is yet. Rumors have pegged the Meizu Pro 6s as coming with the Helio P20 chip announced at MWC, but that has the model number MT6757. On the other hand, MediaTek's Helio X10 is MT6795 and the Helio X20 is the MT6797, so this new MT6796 could be slotted in between those, performance-wise.

AnTuTu says the CPU in the Meizu Pro 6s has ten cores, which means it could be a new version of the Helio X20. We'll have to wait and see. Design-wise, the Pro 6s definitely looks identical to its predecessor, at least from the front.

Isn't it supposed to be more premium model in comparison to pro 6? Cuz it looks like Meizu are downgrading the new flagman's horse power. And all that mediatek processors are just not doing any favor to the company.

Introducing the most recent instillation of our boring phone line......THE MEIZU PRO 6S!!!