Micromax Canvas Sliver 5 is the thinnest phone... without bumps

Micromax unveiled today the Canvas Sliver 5, the world's thinnest phone without any bumps, with a waistline measuring only 5.1mm. True, the Oppo R5 and vivo X5Max are slimmer, but so much so that engineers couldn't fit the entire camera module inside. 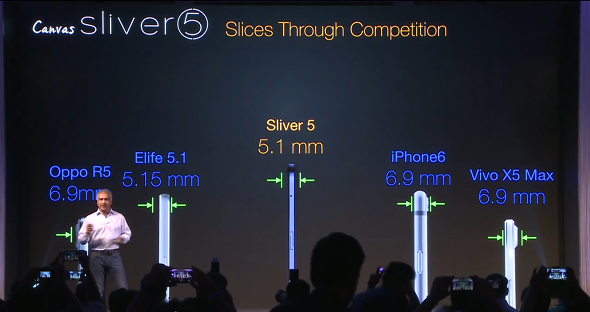 The Canvas Sliver 5 comes with a 4.8-inch AMOLED display of 720p resolution with Gorilla Glass 3, and the company was keen to stress how that has helped bring thickness down compared to IPS panels and Gorilla Glass 2.

The new smartphone is powered by a Qualcomm Snapdragon 410 chipset with a quad-core processor and 2GB of RAM. Internal storage is 16GB, and that's all you get, as there's no microSD slot for expansion.

The primary camera, which designers have managed to make flush with the back, employs an 8MP Sony IMX219 sensor. On the front there's a 5MP selfie shooter as well.

The phone is not only thin, but very light too, at a mere 97g. It still packs a 2,000mAh battery, which may not sound like much, but given the design priorities, it's good to see that Micromax hasn't gone lower. That said, the 0.3mm thinner X5Max has 2,300mAh battery.

We had the opportunity to spend a few brief moments with the phone and shot some live images.

Micromax Canvas Sliver 5 in the flesh

The smartphone comes in a single-SIM configuration only, but it does support LTE and boots Android Lollipop. Priced at INR 17,999 (~$280), the Micromax Canvas Sliver 5 will be available for purchase starting next month, both online and in physical stores.

its too expensive according to its features .....

Royale and Elite. This phone will clearly have an added edge towards others.