Microsoft lists Lumia 835 on its website, it's probably a typo

Nokia Lumia 835 popped up today on the Microsoft's official Lumia webpage. It's AT&T exclusive, has similar specs to Lumia 830 and of you click on the link - it takes you to AT&T's Lumia 830 store page.

The Lumia 835 looks a lot like a typo - if it was a new upcoming Lumia it wouldn't be Nokia branded, it looks like the Lumia 830, comes with similar hardware and even the link suggests for Lumia 830. Oh, and there is another typo in the description text - O1S instead of OIS. 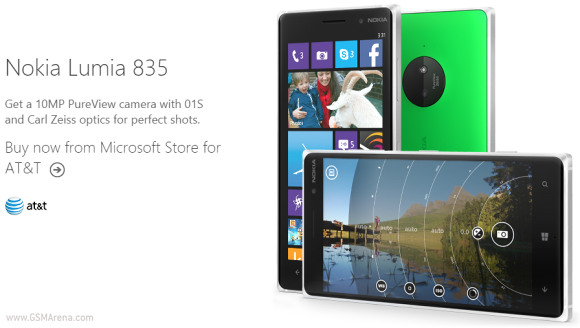 Of course, there is always a chance someone messed up and spilled the beans on an upcoming Lumia 835 while creating its placeholder or dedicated locked page.

If someone is indeed readying a Lumia 835 for upload on the website, we guess the announcement should happen soon. We wouldn't get our hopes too high, though.

A hat tip to Ali Moradi for the tip!

is the same as OIS, but it's not clear, why they wrote it wrong, i saw in other page that this could be maybe the lumia 832 instead of 835, because the specs are almost the same(with less internal storage) and when changing from x00 to x05 always is ...