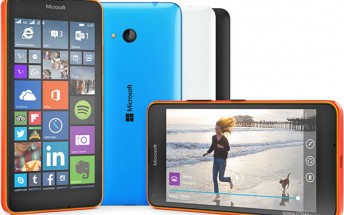 Nearly a month after the Microsoft Lumia 640 XL landed on AT&T, the carrier has also started selling its smaller sibling Lumia 640. The device is now available as part of AT&T's GoPhone line, and carries a price tag of $79.99.

Specs-wise, the handset is powered by a Snapdragon 400 SoC with quad-core 1.2 GHz Cortex-A7 CPU and Adreno 305 GPU, and sports a 5.0-inch IPS display with 720 x 1280 pixels resolution. It comes with 1GB RAM and 8GB expandable memory, and packs in a 2500 mAh battery. In terms of camera, the Lumia 640 features an 8MP rear unit and a 1MP front shooter. It runs Windows Phone 8.1 with Lumia Denim.

If you aren't in the know, mobile advertising firm AdDuplex recently revealed that the handset - which is already available on Cricket, T-Mobile, and the latter's pre-paid subsidiary MetroPCS - is now among the top-10 Windows smartphones in the US, outperforming even the Lumia 520.

Microsoft Lumina phone 540 and 640 already available in my country many month ago.. I don't understand, why Microsoft purchase late in AT&T buyer. I think AT&T buyer is best buyer and strong buyer. almost phone maker want launch new product i...

Were politicians involved. More like economy rather than politics