Moto G9 Play does Geekbench, has more CPU power and more RAM than the G8 Play

The first Moto G7 phones came out in early 2019 and were followed by the first G8 models later that year. So, it’s time for the next generation – the first of which may be the Moto G9 Play.

Its development certainly seems to be going well as it already went through Geekbench 5. There’s some good news – the phone runs Android 10, unlike the Moto G8 Power Lite, for example, which embarrassingly came out this April with 9.0 Pie (most of the G8 series is on Android 10 though).

The chipset is unknown, the benchmark reports it only as “guamp”. The results are pretty similar to what the Moto G8 and G8 Power (non-Lite) achieved, both powered by the Snapdragon 665. It’s an old chip, but it’s still faster than the Helio P70M that the Moto G8 Play was using. 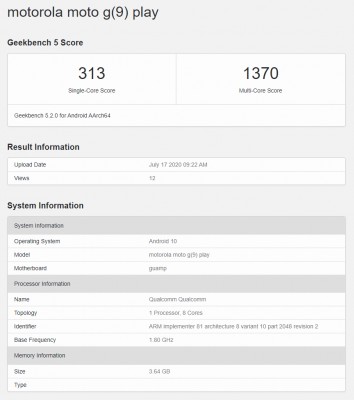 The G8 Play also only has 2 GB of RAM while the new model packs 4 GB. This could be the top configuration, so there may still be versions with less RAM and a lower price tag. Still, it's an improvement.

Whether the Moto G9 Play uses the Snapdragon 665 (or a newer chip, say the 662, whatever “guamp” proves to be), the affordable entry into the G-series is in for a performance upgrade this year.

Well G8 play selling very well in my stores so i expect a big boom for G9 play.

I like how people ask for flagship specs in an entry level phone xD The g7 play was a huge step up from what entry level STILL is(micro-usb, 28nm SoC 2gb ram) If this is priced like g7 play, it will be a steal compared to huaweis and nokias.

Who is made this phone