Moto G9 Plus listed on mobile operator's website, specs and price in tow

The Motorola Moto G9 Plus' launch date is still unknown, but given the sizeable leak from a Slovakian telecom called Orange Slovensko, the announcement might not be too far off. The listing is still up at the time of writing along with pricing, but it might be taken off soon. The phone seems to have a similar design to the Moto G8 Plus overall, but with a square-ish camera island on the back and with an off-centered punch-hole camera on the front. The display itself is quite big this time around - 6.8" with 1080 x 2400px resolution - still LCD, though. The chipset remains unnamed while the memory configuration, or at least one of several, is 4GB RAM with 128GB internal storage. MicroSD card is supported.

The battery powering up the device is 5,000 mAh contradicting the earlier report of 4,700 mAh more than a month ago. 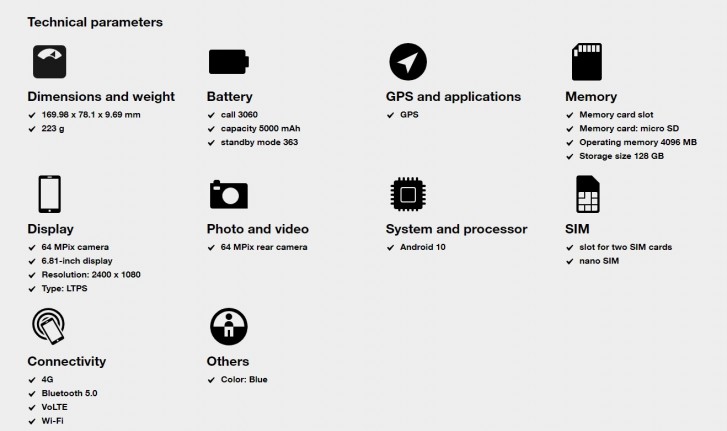 The quad-camera setup isn't detailed, but the main one is 64MP and judging by the size of one of the sensors, there could be a 2 or 5MP dedicated macro snapper in there as well. An ultra-wide camera is also to be expected.

It's good to note that the device won't be having 5G connectivity narrowing down the possible 4G-only mid-range SoCs, the fingerprint reader will be side-mounted and it's going to be a hefty phone tipping the scale at 223g.

The operator is asking €235 for the 4GB/128GB configuration off-contract and with €20 additional discounts, so the actual price might be €255 at launch.

Heavy because of the big battery. If you want lightweight and small battery buy an iPhone.