The contacts manager features tabbed interface, which displays all contacts and the favorites. You can sync with multiple accounts including Google and Exchange. A button to add a new contact is constantly present in the bottom right corner - you can choose which account to sync the new addition with.

The phone app comes with a tabbed interface for speed dial, recent calls and all contacts. The dialer is invoked by taping on its dedicated key and supports smart dialing.

The Moto X Style (Pure Edition) offers high in-call volume. Its stereo speakers are also loud and crisp, so speakerphone conversations will certainly not be a chore.

Messaging is pretty much as straightforward an affair as on every other droid out there. The generic Email app is being decommissioned in favor of the Gmail app. If you tap on its icon, it will tell you the Gmail app is the client that will handle all your emails from now on.

Oddly, Motorola has opted for its own messaging app. We found its interface to be inferior the one found in Google's own Messenger app. Thankfully, the latter is available for free in Google Play.

Motorola should have opted for Google Messenger

As expected, the default Google keyboard is on board as well. It offers two sleek-looking, brand new skins - Material Dark and Material Light. The duo matches the new look of Android Lollipop.

Motorola's proprietary Gallery is the default image explorer on the Moto G (2nd Gen). Its browsing interface is very basic, but there are powerful editing options. It handles videos, too, as there is no dedicated video player.

Google Photos is onboard as well with unlimited backup of your images. Upon opening the app you'll see two tabs - one for all photos and another one for highlights.

Viewing a single photo gives you a number of options. You can share it, set it as wallpaper or contact photo, or edit it. The built-in Photos editor is incredibly powerful too.

Both galleries handle video files, as Android Lollipop lacks dedicated video app, and are equally capable. Available video decoders include Xvid, DivX, H.263, H.264 AVC (MKV files), and MPEG-4. The app will play most major file formats, though serious video fans should certainly seek out a more capable solution from the Google Play, as the lack of AC3 audio support is quite limiting. Subtitles aren't supported either.

The video player is somewhat of an afterthought

Finally, Google Play Music is the default player for your tunes on the Moto X (3rd gen). The app has been treated to the new material design, though it functionality remains unchanged - it can play your local files, as well as stream music from the cloud.

You can tweak the sound via the built-in equalizer. There are dedicated toggles for surround sound and bass.

The Moto X Style (Pure Edition) went off to a flying start in our audio quality test, posting excellent scores when connected to an active external amplifier and garnishing them with impressively high volume levels. In fact in the first part of our test the smartphone was among the loudest out there.

Plugging in our standard headphones set didn't do much harm to the clarity of the output â€“ outside of a moderate hike in stereo crosstalk there were no affected readings. Volume levels dropped from impressive to above average though, so the overall output is just very good rather than perfect.

And here go the results so you can do your comparisons. 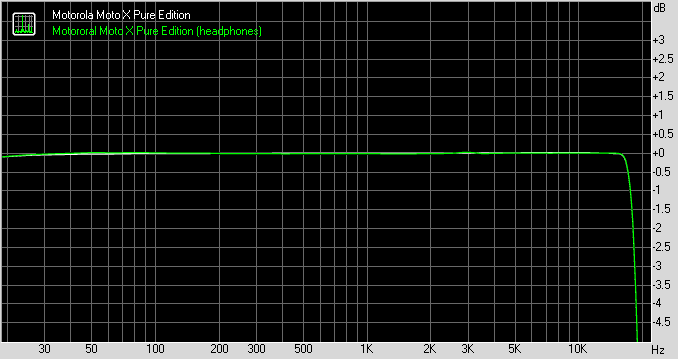 You should have gotten a case for it.

I have used this phone more than 3 years and 6 months, just wow. Camera quality is best. I miss this phone while playing PUBG, but the gaming experience is great. Speaker on both side give ultimate experience while watching videos, listening musi...

How to volte support