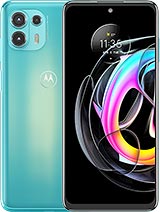 I thought lite meant to be smaller and cheaper..but it seems i was wrong..

Just got this phone reduced for £250 in the UK. Whilst it certainly isn't worth the usual £300 asking price (8GB RAM version) at the lower price it really isn't bad. My only real gripe is Lenovo's dismal software support. It is still stuck on Android 11 in early May 22. At least it has been promised 2 major updates (eventually). The camera is ok but nothing special and general performance is speedy enough. That said this isn't a phone for gamers.

I have this phone for several weeks now; comfortably long enough to share my opinion.

The Motorola Edge 20 Lite in design in nothing groundbreaking, but it surely catches other people's attention, especially if you have the turquoise/green color version (like I do).
It's surprisingly slim, but a hand filler with its 6'7 inch OLED display.
Speaking of display, this one is truly pleasant, with really neat colors and contrast, sharpness, and the 90hz refresh makes animations and scrolling smooth. One things I didn't like was the max brightness - in the sun it's readable, but only barely; go below that and I have struggled to read anything.
The sounds is...surprisingly good for a mono speaker - it is loud, with noticeable bass, but slightly distorted. On the headphones, however, I was blown away with the loudness, bass, and overall quality. That was a pleasant surprise. Vibrations on this phone are hectic and unpleasant, though.
On the performance front - I'm not a gamer, so I use my Motorola for social media, video streaming, music, camera play, and just scrolling the Web. Nonetheless, I really liked with how quickly the apps opened and with how very little difficulty the phone operated with several apps opened. Nothing has ever crashed on me; only one animation jutter happened, but nothing major. The stock Android 11 experience has been positive for me, where previously I had smartphones with Android, but layered with the manufacturer's own UI on top. The Moto gestures are a nice addition and I have liked them in an instant.
Connectivity causes no reason to complain, however I was unable to test out the 5G here, as it is still limited. Phone conversations are clear and uninterrupted. NFC is present here as well.
On the battery front, the 5,000mAh battery is very much satisfying; as an example, I had the phone at 100% battery at 11 AM, used it with mostly LTE, lots of camera time, music, video streaming, some GPS, and after 6h 30 minutes of Screen on Time I still had 30%.
So 1,5 days of moderately heavy use is very much possible, and even longer if you don't use the phone too often. The 30 watt charger brings your phone battery reasonably quickly, with charging to full from 0% takes about 1h 15mins.
Cameras are very important for me in a smartphone, so I demanded a lot.
And I was not disappointed - the main camera is very competent in daylight, with lotta details and nice colors, if only a bit warm on the white balance. HDR does its job, albeit I've seen better; the shadows can still be a bit dark, but luckily the highlights aren't blown out.
Overall I am more than satisfied; the quality matches my expectations. Even the ultrawide camera, despite being only 8mpix, does a good job, with little distortion and close colors to the main cam. The details are lost, as expected, but my previous smartphone (Xiaomi Redmi 9) with the same mpix count UW camera, was just really bad. The plus side of this ultrawide camera is the autofocus, enabling us to make macro shots, which don't necessarily blow away, but are vivid and reasonably sharp (if you manage to focus on your subject accurately), certainly way better than the 2mpix you get in the price range.
In ambient light the Edge 20 Lite holds its own still, but in low light conditions, it isn't so fiery anymore, with noticeable grain and loss of detail; the ultrawide camera is barely usable at this point, as it does not have Night Mode.
Night Mode on the main cam improves some things with bumped up exposure and colors, but the less light you have, the more grain you'll get; with some light sources the photos look ok.
The videos are average, with stabilization only at the 1080p resolution, but it works quite well. The 4K is of course better in quality and color rendition, but no stabilization there.
The 32mpix selfie camera does a good job even indoors, but take notice - remove the Face Beautifying option off IMMEDIATELY - I did not do so at first and I was at first furious with the quality, only to realize I had to turn that option off to get good results. The colors are a bit too warm at times though, and sharpness can be lost if you are too far away from the camera.
The portrait mode on both the back and front cameras is competent, with accurate separation and nice colors, but with overexposed highlights.
Overall the selfies are great, but for 32mpix, I expected a slightly better performance.

Are there phones in this price range that are better? Of course, but that shouldn't dismay anyone from buying this great smartphone. If you want great battery life, a smooth experience, excellent music and capable cameras, the Motorola Edge 20 Lite should more than satisfy the average user.

Anonymous, 21 Feb 2022It has microSD and 3.5mm because it is a crap. Low-entry l... moreOh so now AUX and SD cards are for crap phone? This is not a good phone for the price, 11T kills it, but your argument is bs.

It has microSD and 3.5mm because it is a crap.
Low-entry level calculator.

Anonymous, 17 Jan 2022I see that GSMARENA has test photos for the Samsung Galaxy ... moreA52s has OIS and Samsung is known to process photos well, but they might tie. However, if you're really into cams, pay a bit more and get something better than both. Otherwise, this phone seem to be the better one of the two.

I agree with past posters that this is a fine SMARTPHONE at a very reasonable price. Best part is its ability to operate over 5G systems at higher speeds (50GB/sec download), is DUAL SIM, and is vetted to operate on AT&T's network here in the United States.

Its UK capability using a MOBAL SIM on cruise ships thru Cellular at Sea is also a real plus. K

Best phone I've ever had,super Oled display and gr8 5g.Looks far more stylish and slimmer than any Iphone for a fraction of the cost.

Anonymous, 13 Jan 2022Does the 108 megapixel camera have the crystal clear high r... moreI see that GSMARENA has test photos for the Samsung Galaxy A52. Where are the test photos for this Motorola Edge 20 Lite so to compare?

Where can I see ME 20 Lite distant shots with detail and signage?

Does the 108 megapixel camera have the crystal clear high resolution in it's distance shots.

Can I read a license number for instance from a block or two away?

Is it comparable to hi-res cameras in the higher end smartphones?

What smartphone would be considered to have a better resolution clarity?

Bahunov, 25 Aug 2021Does it have compass sensor and NFC? UK version?Yes. It has both.

Power User UK, 23 Sep 2021Its just you.Camera bump is irrelevant with a good case on it.

ParaFoil, 05 Dec 2021There is no OTG in this smartphone. This is very disappointing.According to Motorola, it has USB OTG.

There is no OTG in this smartphone. This is very disappointing.

Jules, 09 Oct 2021But what about the camera? Clear photos?Camera is great!!

I just got this phone and coming from using the Moto g9 power I can say I am happy with my purchase.Camera is amazing .I love the Oled display.Battery life though not as great as the Moto g9 power ,is great.I was looking for a better camera phone and that's what I got.

X, 17 Aug 2021the phone has shared SIM/SD card slot.. :(Its better than no SD Card at all like other phones out there!