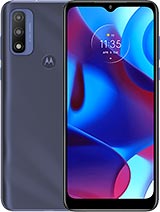 This must be the cheapest Moto phone and seems like a successor to the Moto play which was the cheapest of its 3 phone lineup back when they released a trio of play, power and regular Moto. Now Moto releases so many models it's hard to keep track. IMO you can't beat the price and for most people who don't read phone specs or post comments it's enough. 32GB and 3GB Ram isn't much but it's enough for basic use. I'm rocking a G7 Power with same 32GB and 3GB but am at 73% storage even though I don't have much apps and no games and no photos. It's just system updates that eat up that space. Since I've already got my one system update guess more storage isn't needed anymore. Let's face it. These el cheapo phones are meant to be disposable. But for $170 you can't complain even with low specs and one update. Thing is you can keep using the phone even without updates.

This 2021 lineup comes pretty garbage, specs weaker than past line... especially these entry level, totally crap and waste of money, all of them mediatek and unisoc... but if was only that, ok, but at that prices... no excuses

The battery is nice and the display is looking good too. Nice one from Moto and mediatek

My personal opinion: It would be nice if they fit the name of this mobile phone with motorbike
Can be advertised like: All bikers love Motorola! Then there will be sound of roaring motorbike

Anonymous, 16 Oct 2021Ever heard about chip shortage?If that was the case, they should have just saved the money and not built the phone , because it's just e-waste

Compare with Redmi 9T. The specs are higher but about the same price. Now I understand the profit margin by the phone makers.

Zero, 15 Oct 2021This is far worse than clearing stock. It's literally ... morePrice of the sd processors r high

Zero, 15 Oct 2021This is far worse than clearing stock. It's literally ... moreEver heard about chip shortage?

Danny301, 12 Oct 2021This one seems so pointless. Pure as in pure crap. C'm... moreThis is far worse than clearing stock. It's literally scamming people. Heck, they can put an Snapdragon 450 and is the same result.

This one seems so pointless. Pure as in pure crap. C'mon Motorola. You can do so much better. It seems like they're just clearing stock. Very China-esque of them.

[deleted post]With no Android one device

Oh Dear Another model from Motorola. How many this year - with no hope of any OS updates.
Motorola is just a joke company.

If Motorola was still with Google, they would never put a nonsense like „AI dual camera“ on the back

Come on Motorola!
Even the Moto E series has more sense than this one.
Even the punny Moto E20 is better than this!