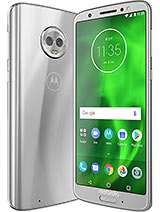 I am using Motorola g6 for the last two years. It was good since last two years except slow opening to start, but recently it was fallen and the screen glass was broken, the button covers went out I found difficulty to get accessories for replacement maintenance, even the phone is unable to start except blinking with moto logo. Shall I throw it? or there is other maintenance option?

K Baah, 10 Jul 2022Please am in Ghana Africa, am using Motorola g6 and the par... moreGot 1 with broken front and back glass carrying what supposed to be a swollen battery. I couldn't find a replacement battery so I took 1 out a LG Stylo 5 and soldered it to my moto g6 battery connectors and so far no problems occurred works better with the LG battery to me

Bought this G6 two years ago refurbished for $80 two years ago. It has been an excellent phone. No issues except for occasional need to do a hard restart which might be caused by apps that aren't up to date.

I bought my Moto G6 in Amazon sale in sept 2017 and till date it has never let me down. The only problem I am facing after using for nearly 5 years is the the speakers volume has reduced to 20% of its initial capacity. I bought it around 18k INR and till date have only spent 99 INR each for 2 back cases. Happy to say, it turned out to be a great investment.

Hands down the best phone I have ever used.

Please am in Ghana Africa, am using Motorola g6 and the parts and it accessories are not available, the screen batteries, protector and it covers
Pleas how can one get some to make those of us happy
I really like the phone very nice and simple with good camera
Thank you

I have one a nice dual sim model in dark blue, just updated the software to Android 11 (LineageOS 18.1) because I hate when phone manufacturers just stop providing updates. Mine is still in very good condition because I just don't use it, originally bought it to fill in whilst I was waiting on my new Samsung about 2.5 years ago but the Samsung arrived quicker than I expected. I'm in Australia if anyone would like to buy it.

This phone has been the best phone I've ever owned. Going on 3 and a half years now and it still works perfectly. The only reason I am here is to see if it had dual sim, which it doesn't seem so. But great phone nonetheless. I would buy another one hands down.

I changed from Samsung to Motorola g6. I see that the moto g6 was a good investment at the time but after only 3 years the phone began to have faults, first in the battery that I had faults 2 years after buying it, then it started to fail the mobile signal, I practically had to be under the antenna to have a 3g or 4g signal. The truth is that I had not had this experience with mobile phones. Now I have to buy a new cell phone because the current g6 is more expensive to send it to repair. Now I think that all the G Series version are more of the same. That is to say, do not expect to have a phone that will last you more than 5 years if your passion is gaming. Charging and discharging the battery takes its life very quickly and not to mention the temperature.bad bad

Bought my Motorola Moto G6 nearly 3 years ago, thinking that it is going to let me down because of it's low price ... But honestly, this has been the greatest phone I have ever owned, especially after dropping it accidentally for at least 4 hours in the roadside gutter on a very rainy day with nothing happened to it ... I thought to share my experience with anyone thinking about buying a reasonably priced durable phone.

Actually in 2021 it is still usable. I actually reset it because it was stuck on the boot logo and after it reset. It is fast again but not really as fast as a flagship. Battery is still good tho

I bought my Moto G6 a little over 3 years ago. Over the past few months, the touchscreen has become less responsive and the phone has become slower. Just a few days ago the sound finally cut out completely. For the first couple of years it worked great and it was probably worth the cheap price but now I think I'll pay the extra amount for a better phone.

Moto G6 Fingerprint sensor suddenly dies out also the phone does not wake by any means. If anyone calls he gets to hear the phone ringing , but actually phone does not ring nor wakes up. Happens multiple times in a week. The only Solution then is to re-start the phone. Does anyone have any other solutions for this issue. Thanks !

I bought my moto G6 when it came out, and since the day it's been bought it has never been powered off or not used a full 24 hours. It's on and being used at least 15-16 hours a day, every single day. With that being said, a few months back it started freezing up and lagging pretty badly, so I performed it's first ever factory reset and since then it's been good as new. The back of it is shattered and covered in duct tape but I couldn't expect it to come out of being hit full force with a wood splitting maul without some type of damage, and it's still going strong. I wouldn't think of buying a new phone without first considering a Motorola. Overall it's been the best phone I've ever bought.

I have had my MOTO G6 for about two years and has been a great phone, other than one thing. The ringer volume has slowly ,almost totally gone. I have to wear an ear piece constantly to here incoming rings or message rings. I miss calls and messages because of this if I don't have my ear piece in.

I've had my Moto G6 for 2.5 years. It has been and still is a great phone. Never given me an issue of any kind. Use it with Android Auto in the car all day and everyday for sat nav and full comms and streaming music in the car and at home. I'd be lost without it. It's been generally slammed around a bit but looks good as new. Being of full glass construction it's pretty tough. Can't believe there are a few folks with bad experiences with this phone. I know others who have this phone and they too have not had any issues. I guess it's such a popular phone that it's sold in great numbers, there's bound to be some that fail. Having said that, I never had any great experiences with some other so call 'top' brands so failures are not unique to Motorola.

I have both the G6 and G7 Play, and prefer the G7 Play. But prefer my Redmi 7A with Gcam over both Motos. Amazing photos with Gcam.

It's just another phone. My old Motorola Defy was the best, I'd still be using it if anything worked on old Android versions. I used to throw it at the wall any time anyone said anything about protective cases for their phones. Nowadays Motorola is just another phone brand, I can barely hear it ring, its vibrate is weaker than my watch's, it's too big. The only thing they haven't changed are their habits of having no Android updates ever.