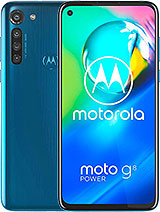 I too would like to know if this phone still works in the USA.

Does anyone know if this phone bought in France works in the USA please?

It's odd that the Moto G9 and Moto G Power (2022) are both significantly worse than this G8 Power. SD665 is nearly twice as fast as the Helios G37 in the newest one, what is moto thinking if they're even thinking at all? This phone's only problem is lack of 5ghz wifi

sterk, 21 Sep 2022I'm almost two years with this phone and battery life ... moreI don't have that bug with the video, although I am using VLC media player for videos.

I'm almost two years with this phone and battery life keeps on being a true champ. It gives me a day and a half out of intensive use.

The only complaints I have is that the Android 11 update isn't as stable as it should as to when the phone was on Android 10. For example

1. The speakers keep sounding incredibly well for a phone this cheap but there are times when they saturate in some music tracks and therefore I have to put volume down a bit. That didn't happen to me in Android 10 at all, I hoped for a fix to that but it never came.

2. Videos up to 1080p,4k/60fps slow down weirdly making it very annoying. Turnaround is using another video player and setting a low-res codec (SW) for them to play normally or the other one is just playing the video just in 30fs in both formats which I don't like. I could bear with it to a point but again that didn't happen to me in Android 10.

KondriX, 03 Sep 2022Well, the battery on this one should be good for at least t... moreI foolishly forgot to put it on this handset, because Moto screens feel so good normally I swear they already have one on, but I'd bought a pair, and put one on the G8 Play- worked out better because the family member who uses that one immediately dropped it on a rock 😩

Budget Techer, 14 Aug 2022Welp, battery life is at 80% capacity, it STILL lasts all d... moreWell, the battery on this one should be good for at least two more years, even more. Anyway, you don't use any screen protector on your phones? By the way, I've also encountered some Bluetooth problems, my headphones keep disconnecting from time to time, but it's not constantly, so not sure what's the problem here.

The Bluetooth issue didn't improve but I listen to music with my headphones fine.

I scratched my screen's coating layer up with coins tossing the handset in my back pocket, but it's barely noticeable unless the screen is off and you tilt it to see the scratches.

I hardly take it out of the case so my body has zero damage, and my cameras are all fine.

I do have an issue where the screen stops timing out when I use certain apps, so I have to reboot it for it to kick back in otherwise, she's not aging badly.

Going to upgrade in a few months and join iOS since I'm using a part of their ecosystem for work.

This old fellow is going to be my toss about handset cuz it's more than shown it's capable. Maybe I'll change the battery.

I have been using this model for one year, I have realized mine has good battery life, poor network and internet connection. Could they have used an extenal aerial antenna protruding. Though generary its okay.

Anonymous, 18 Oct 2021Which month you got update of android 11I just bought mine from amazon last october 2021. I updated my moto g8 power last week to android 11. I love this phone specs so much compared to my last samsung S5. I wish it can last longer than my S5 say 6 to 8 years tops

Linden, 29 Aug 2021Mine updated automatically to 11Which month you got update of android 11

Great phone and the battery lasts all day with over 50% power left. However, within a few months the rear camera has dust behind the lens... It cannot be cleaned out and my macro camera is just a blurry mess.

I just bought this phone now in Aug 2021 and man. I love it. I had to watch many reviews before I could really buy it. I suffered with a bad battery life phone before and now needed a phone with great battery life with great specs and a good camera( not excellent because I knew great camera calls for greater price. I'm in campus college I couldn't manage spending much bucks on a phone, in campus you will really appreciate this phone. The design great, the speakers are great( I don't even want to be using headphones cause I feel like they ruin the quality. I don't even know want to complain about. Motorola thanks.

Does anybody get android 11 on G8 power

Does anyone here has 4g working on sim2? On my phone 4g is working only on sim1 and not on sim 2? Is this a fault ?