This is probably the second time Motorola's upcoming Moto G9 Plus smartphone has been spotted online with the same XT2087-1 and XT2087-2 model numbers. This time, the handset appeared in TUV Rheinland's certification revealing the battery capacity and charging speeds. 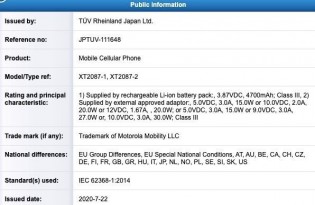 As per the document, the phone features a large 4,700 mAh battery, which can be charged at up to 30W speeds. The certification doesn't reveal if the appropriate charging brick will be bundled in the box

Earlier EEC certification suggested that the device will feature at least 4GB of RAM and 128GB of internal storage. Given by how many certification processes the handset has cleared, we are going to assume that the the G9 Plus' release is drawing near.

Motorola Moto G 5G Plus in for review

I originally thought it had 6GB of RAM which is One Major Reason why i purchased, besides the SD730. This model does not come with 6GB, it comes with 4GB :( I wanted the Fusion+ but only the Fusion is available to me :(

100 percent ! Moto has a seemingly great range of phones where almost every model has an imposed fatal flaw. for the One Fusion+ its the lack of a compass (what year is this!) , the G8 power has no 5Ghz WIFI, the Moto 5G Plus has a crazy long sc...

But what does the Z5 have? While the low/mid-range Moto's are pretty decent, my Z2 force won't last forever, allegedly.