Last year Motorola returned to the tablet market with the basic Tab G20, then released the more capable Tab G70 this January. Now the brand is working at a model in between those two – the Moto Tab G62 was spotted on the Google Play Console.

Unfortunately, most details are still under wraps, but we have two model numbers – XT2261-1 and XT2261-2. Looking at the marketing names for the two, it’s clear that the second one will have 4G connectivity. 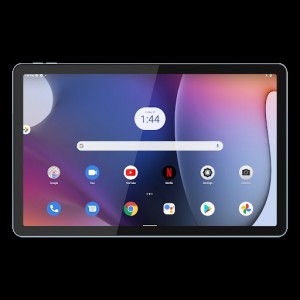 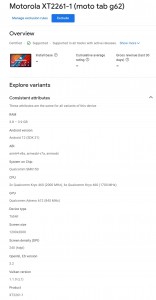 The chipset will be paired with 4GB of RAM and will run Android 12 out of the box. The display will have 2,000 x 1,200px resolution. The rest of the original post follows below:

That was the case with the Moto Tab G70 as well, an 11” tablet powered by the Helio G90T. It launched in India and Brazil with Android 11, 4/64GB memory (expandable with a microSD slot) and a 7,700mAh battery with 20W fast charging.

By the way, there is also a Moto G62, a 5G phone powered by the Snapdragon 480+. There is probably no relation between the G62 and Tab G62 beyond the name. It may instead be related to a Lenovo tablet – e.g. the Tab G70 is based on the Lenovo Tab P11 Plus.

Motorola Tab G70 goes up on Flipkart with an 11" display, Helio G90T chipset

The g70 is a rebadged lenovo p11 plus, just compare the 2, why does it cost more than the p11 plus, exact same hardware.