Have it your way

The gallery in Android 4.4.4 KitKat is called Photos. Upon opening the app you'll see two tabs - Camera and Highlights. Above those two tabs you get the Movie, Search and Settings shortcuts.

Creating a movie within the gallery

There is also an Auto Awesome section. It is something like a smart gallery that combines similar photos and videos in a cool way - it either exports a collage picture or a motion gif. If you like the combination the gallery has made for you, there is a dedicated shortcut to save the new picture in the gallery.

The old gallery is also on board. The Default view of the gallery is Albums, the first of which is always the Camera album, which has a camera overlay icon too. Rather than the familiar stacks, the app uses a grid of photos, two on a line.

The video player has retained its stock Android interface. Like last year, Motorola has added much better codec support than the one found in Nexus devices. The video player is now perfectly usable out of the box - it plays a host of formats, which include H.263, H.264, MPEG4, VC-1, and VP8.

You can also wirelessly sharing videos with a Wi-Fi enabled TV. The feature relies on DLNA technology to connect and the Miracast protocol for streaming. It's another feature most customs launchers had, but is only now making its way to the platform itself.

Google Play Music is the default music player. It features Listen Now feature, which tries to determine what you like and the sequence of your track-changing so that it can start offering you music you might like to play next.

Now playing screen • the notification area and the lockscreen

The Motorola Moto X (2014) did pretty well in our audio quality test, even if it didn’t quite break any records. The first part of the test (the one where it's connected to an active external amplifier) saw it improve on the scores of its predecessor and do excellently for the most part.

The only two minor issues were the frequency response, which showed cut-off at extreme bass frequencies and the above average intermodulation distortion.

Plug in a pair of headphones and the Motorola Moto X (2014) shows a rather big increase in its stereo crosstalk but no other notable degradation. Just above average volume levels in both tests round up what is not quite perfect but certainly solid overall performance. 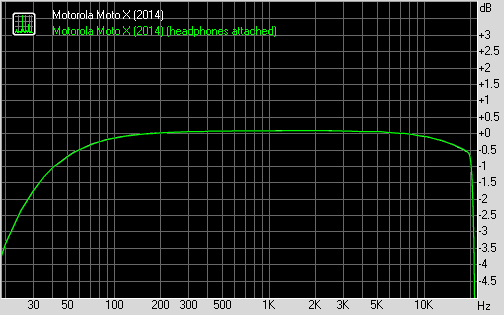 Is the smartphone waterproof? Can we root it and get root permission on apps?

Best phone I ever had