Google's latest and greatest, the Motorola-made Nexus 6 has gotten a substantial price cut in India. Major retailer Flipkart now sells the 32GB version of the device for INR 34,999 (or roughly $550) a good 20% off its regular INR 43,999 asking price. 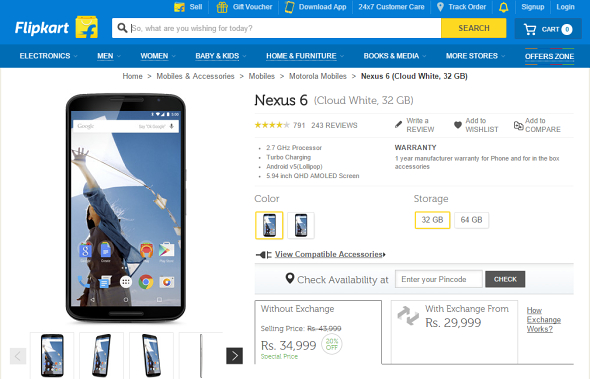 If that's not enough of a good deal for you, the store has an exchange program going on where you can get up to an additional INR 5,000 off the Nexus 6. You can turn in pretty much any smartphone, though some will obviously net you a smaller discount. A quick check showed that the iPhone 4S and Galaxy S4 are good for it.

There's no word on how long the offer will be active, so you may be wise to act fast, if you've been eyeing up the Nexus 6 but found it too steep until now.

Thanks to Pritesh for the tip!

Just launch long time and slash price in India ?? Thai is bad news for nexus Google. India is big market which any phone brand want win smart phone competition ... What is next?? I think nexus will reduce price with US/UK market to competition with a...