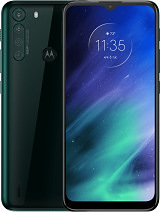 This is bed phone.because volte future not built

is moto one fusion is better than moto one action in camera ?

No Android 11 yet, still hoping.

Am using the international unlocked version in the USA, the one currently available at Amazon.com.

I've posted my comments previously and my phone is still running like new, in case anyone's curious.

Anyone get android 11 yet?

Is Motorola 1 Fusion good Mobile or not need reviews,

MP, 23 May 2021My phone freezes from time to time but it always seems to b... morePrivacy concerns aside, the Chrome freezing issue is why i no longer use it on any of my devices. It causes problems on my laptops, phones, tablets, all operating systems. Personally I uninstalled or disabled Chrome from everything and currently favoring Firefox which gives me no problems at the moment.

My phone freezes from time to time but it always seems to be when I have Chrome open.

Will Google search the Google phone app, i know there are modded ones, but first i'll search using the terms you provided (thank you btw!)

For poster Omega X: I haven't experienced any freezes or pauses. Also since you're in the market for this phone, keep an eye on the G40 Fusion (or slightly pricier G60). They are "similarly" priced with an upgraded chipset and longer list of features including higher refresh rate, more efficient CPU, bigger battery, NFC, Wifi 5, a faster UFS 2.1 storage drive, etc etc. They'll just been released so hopefully they'll be available for purchase extremely soon. Had i known i would have tried waiting for the G40 Fusion but i can always pick it up at a discount at a later date. In the meantime i'm really enjoying the One Fusion.

Hi guys,
Can anyone tell if this phone is having serious issues? I read somewhere that it freezes from time to time, this for example is a deal breaker for me. Thanks everyone.

soon to be owner, 16 Apr 2021I received mine a day later. I am a former user of the G7 P... moreThe Gcam mod works very nicely with this phone. Google Gcam moto one fusion normal.

soon to be owner, 24 Apr 2021Have not had that experience myself. My last update is the ... moreInteresting, my update is labeled March 1,2021. The freeze issue happens very infrequent for me however.

BUT we still do not know if Fusion owners in North America, Europe and Asia will get this upgrade. It's pretty obvious South Americans will though.

MP, 23 Apr 2021I have the same issue; seems to occur since the last updat... moreHave not had that experience myself. My last update is the one labeled as March 31st, 2021.

Also, i found un-official information online that the Fusion and Fusion+ will receive the Android 11 upgrade. Hopefully it's true for all areas because this phone was originally intended for south america.

PS: the new G60 and G40 Fusion about to be released look to have great specs, Snapdragon 732, good amount of ram, 6.8" high-res screen with 120hz refresh rate!, NFC etc etc etc. All for around $200 or less upon release, excellent for a mid-range phone imho. I'll monitor their prices and when they drop to $150-$160 i may purchase one.

Basturk , 21 Apr 2021My phone gets frozen sometimes and I have to turn off displ... moreI have the same issue; seems to occur since the last update. It's infrequent though. Hopefully a future update will correct this

My phone gets frozen sometimes and I have to turn off display and turn it on again to make it work again. Sometimes it wont work This solution. Anyone having This problem?

CptPower, 15 Apr 2021Well that would be nice from you my friend. I have Moto X... moreI received mine a day later. I am a former user of the G7 Play, E6 plus, E4 and still have these phones to use them as tablets / remotes.

The One Fusion is my best Motorola experience by far. The fastest overall, the strongest 2.4ghz wifi (i prefer coverage distance and don't care for wifi 5). It does not have all of the bands for my area but phone coverage and voice quality are very good including wifi calling (Mint, uses T-Mobile network).

Same pure Android experience and any extra apps are either removeable or can be disabled including Google apps. I've barely gamed on it but the phone barely got warm on the back, if at all. On my previous phones i had to keep graphic settings on low but this phone handles medium quality just fine.

I do not notice any of the bizarre quirks people get with other phones, everything works as intended including casting, hotspot, etc etc. The single speaker on the back is decent to good, volume as well. The 5000mAH battery lasts as long as i expect it to, over 1 day with ease. The camera is noticeably better than the previous phones i posted above but I haven't installed Gcam yet. The screen quality is good despite being 720p. Brightness is enough to be useable outside on sunny days. Overall screen size is perfect for my taste.

The case Motorola bundles is nice but it does not come up high enough to protect the phone if it falls on it's face. Therefore I purchased a case and glass protector combo on Amazon, product # B08FGBCG8L

The one key aspect i could not find information on is Android OS upgrades, i can't tell if Android 11 will be offered at all, or maybe there will be a limited offering for South America only since the phone was meant for that region (i am in North America btw and took a risk in buying this phone). But otherwise all of the recent security updates are coming through just fine. The Android OS update situation will determine if i keep this phone for 1 or 2 years. I may root it afterwards but either way am extremely satisfied with it especially at the current $149 US.

Soon to be owner, 10 Apr 2021The Snapdragon 710 chip was "pre-announced" 3 yea... moreWell that would be nice from you my friend.
I have Moto X4 my main phone but after 3 years i would like to swap it for something else which is at same level or above and have pure android experience.

CptPower, 28 Dec 2020Still very expensive for a 3 years old CPU. The Snapdragon 710 chip was "pre-announced" 3 years ago but it was released some time later.

It's built on the 10nm process, has excellent thermal and low power requirements, has Kyro Gold A75 (newer) processors onboard. Thus the 710 is still considered very modern. Check the comparisons online and it beats everything in this pricerange. Most other inexpensive phones will have weaker processors that are built at 11nm and 12nm with older A73 and A53 cores.

Also, price is now down to $149 for the 64gb model, and $169 for the 128gb.This phone may not be for everyone, but at $149 there's very little room for complaint (in the north american market). I get mine tomorrow! Will put up a review within a week or two.