We should give Asus credit for the excellent work it has been doing with its recent device lineup. Zenfones tend to offer excellent value these days, but the real problem is actually finding the model you like and picking it up. Sifting trough the lineup is a somewhat fruitless endeavor, despite the fact that Asus has assured us that you just have to know the seven or so last symbols of the model number and everything becomes clear as day. But, we digress. 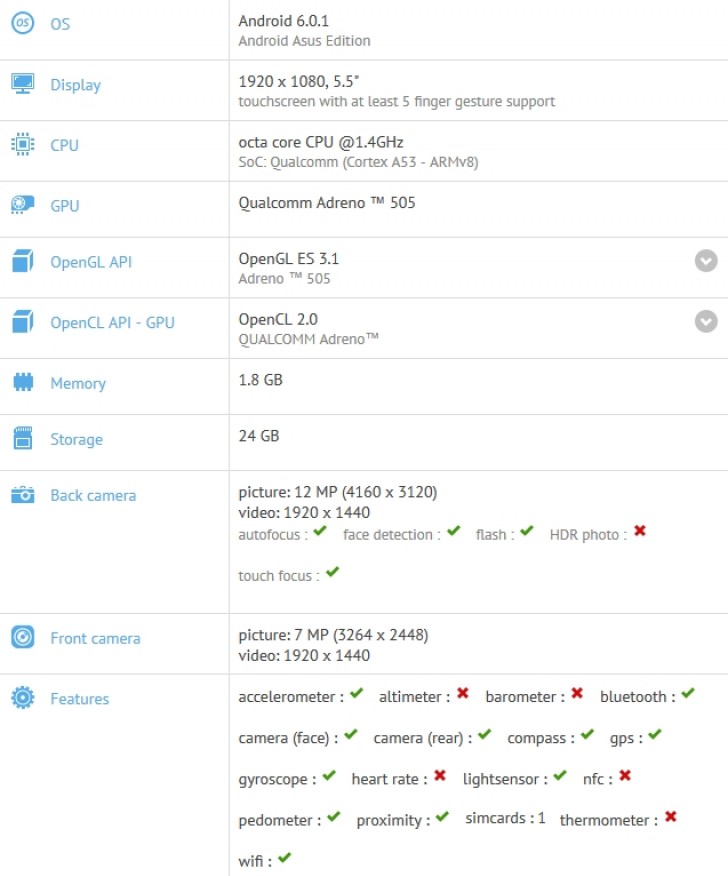 This rant also applies to our current situation - looking at a GFXBench specs sheet for a mysterious Asus device with a model number of Z01B. After quite a bit of research, we were almost fairly certain that we found a retailer that used the Z01B number to refer to the ZenFone 2 Laser ZE500KL. However, that one has a 720p panel, which, among other things, does not match the GFXBnech specs at hand.

They describe a device with a 5.5-inch FullHD panel and an octa-core Snapgradon SoC. Considering the Adreno 505 GPU, it must be either the Snapdragon 430 or Snapdragon 435, both of which still new and not that commonly used.

This definitely proves we are looking at a device that's yet to be announced. The reported 12MP main shooter is also new for the Zenfone family. The rest of the specs on the unknown smarthpone include 2GB of RAM, 32GB of on-board storage, a 7MP selfie shooter, as well as what looks like the standard assortment of connectivity features, like Wi-Fi and Bluetooth of undisclosed versions. No NFC, though. The phone also appears to boot Android 6.0.1.

I still got no marshmallow until now, I'm using ZE551ML 2gb ram

Dont even look at a Samsung then if you think Asus are bad.

Asus has released marshmallow update for all of its ZenFone 2 series, you can check it with system update app.