Netflix led US streaming market in Q4, HBO Max gained the most

The subscription video on demand (SVOD) market in the US experienced remarkable growth in 2021 and based on JustWatch's metrics HBO Max saw the largest growth at 5 percentage points.

Netflix held on to its lead with 25% of the market, followed by Amazon Prime and its 19% while Disney Plus and Hulu each stood at 13% of the market. 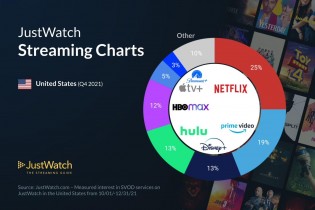 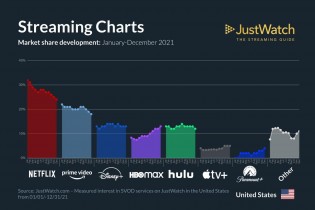 HBO Max also saw the highest growth in Q4 with a 2 percentage points increase which helped it close up on Hulu and Disney+ in a bid to become the third-largest streaming platform. On the other hand, Netflix saw a 2 percentage points decline in Q4 while Hulu, Disney+, Apple TV+ and Paramount+ all gained 1pp in Q4. With increasing competition levels it will be interesting to see how the tables will turn in 2022.

Netflix is raising its prices in the US

Wow, someone is insecure

Netflix initially was interesting and subscibed for a few years but cancelled. Eventually run out of stuff to watch on it. Now only use gift vouchers to subscribe 2 times a year and for about 6 weeks each time. That is more than enough.