After the Zenfone Zoom and Zenfone 2 Laser, Asus has now started rolling out an update to its ZenFone 2 (ZE551ML) smartphone. The update is aimed at improving system stability, although no official release notes have been posted yet. 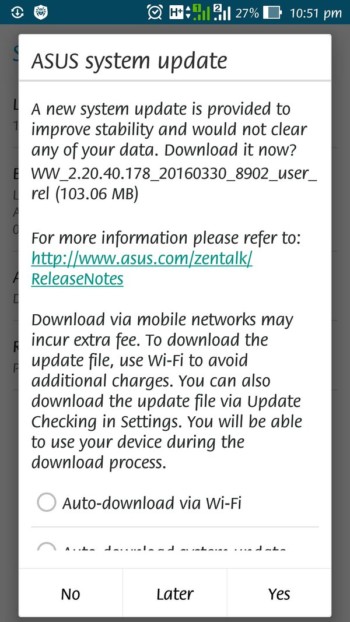 Rolling out over the air, the update - which weighs in at around 103MB - may take some time before it hits your handset. However, if you are feeling impatient, you can manually check for it by heading to the Settings menu on your handset.

Does you're comment have anything to do with concerning the update? Or are you just boasting the fact that you have a bigger smartphone? Which, cool! But relevant details about this update would be much appreciated.

why my phone can't on...haaaa

I am game lagging issues , i have done clear cache, even factory reset, still game lagging. Can somebody help me fix this issue.