New HTC U11 variant spotted on GFXBench with 6-inch 18:9 display

Just as the device appeared on popular benchmarking app – GeekBench, HTC’s unannounced device has also appeared on GFXBench, complete with some new information about the display.

Rumors point to an HTC U11 Plus model running the latest version of Android – 8.0 Oreo. There’s also going to be a 6-inch display with a 1440 x 2880 px resolution, which calculates to a taller 18:9 display. This could be HTC’s re-release of the HTC U11 with a display that fills out body and reduces the size of the bezels. 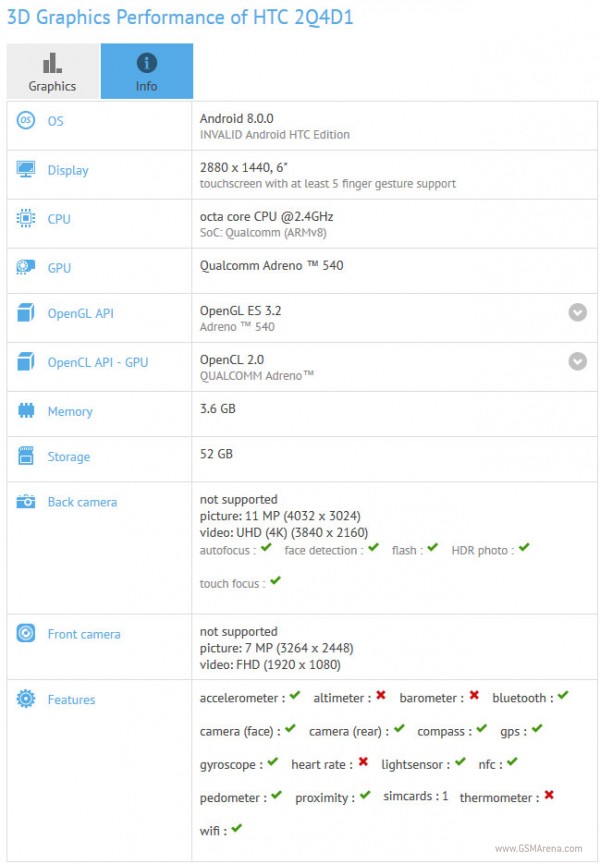 Considering that the LG V30 shares an identically-sized footprint to the HTC U11, the 6-inch display size should be a nice fit for HTC’s mystery device.

The benchmark result also shows a Qualcomm Snapdragon 835, Adreno 540 GPU, 4GB of RAM, and 64GB of onboard storage. Camera-wise, the unknown device shares the same specs as the HTC U11: a 12MP main camera and an 8MP front-facing one.

An invitation for a November 2 event had already leaked a couple of days ago, which sets the date for HTC’s unveiling of the rumored HTC U11 Plus at HTC’s headquarters in Taipei.

HTC U11 Plus makes an appearance on Geekbench with Android 8.0

HTC sends out invites to a November 2 event, is it the U11 Plus?

This dumbass aspect ratio once again.

A company whose phones were once known for their sound quality.

No 3.5 mm jack =no purchase. HTC doesn't learn from their mistakes and insist on stupid decisions that harm their business...