The Huawei Nova 7 SE smartphone was initially launched with a Kirin 820 chipset with 5G capabilities but was later discontinued. Multiple rumors pointed to a relaunch with a Mediatek Dimensity 800U chipset, and we now think we have the official launch date.

According to one leakster, the new phone will arrive on October 16 with the full (machine-translated) name Huawei Nova 7 SE 5G Vitality Edition. 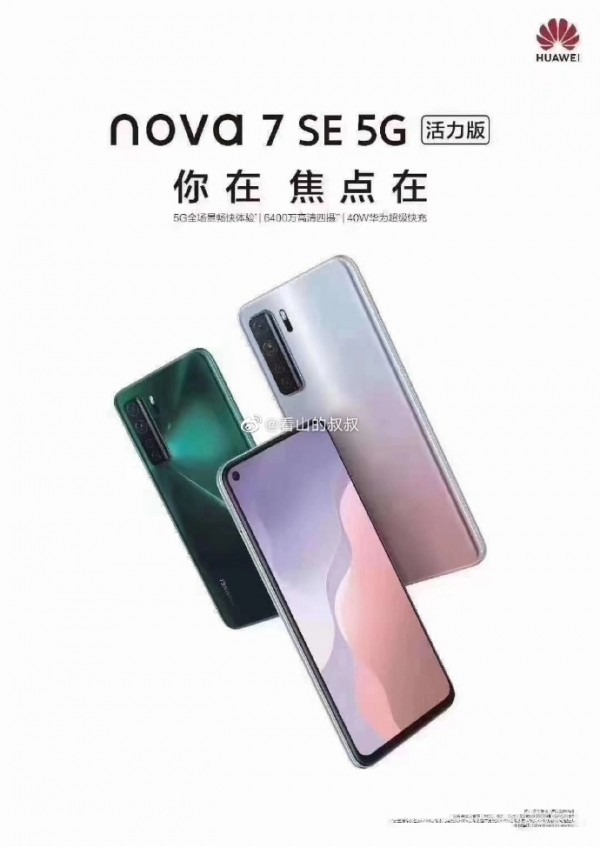 The new device will have only one memory combination - 8GB RAM + 128GB of storage. The rest of the specs will remain the same - four cameras on the back (64MP main + 8MP ultrawide + 2MP depth + 2MP macro), an LCD with a punch hole for the 16MP selfie camera, and a relatively big battery with a 4,000 mAh capacity and 40W fast-charging.

The Dimensity 800U chipset offers broadly similar performance to the Kirin 820 with its 5G capabilities and 7nm process technology build, so we expect the price tag to remain the same.

I love Huawei mate phones and fill better then using iphones, no comparison but I bank on Huawei. Hope many more embargoes will not stop it's move towards being top

I like the name of the series - Nova ! Dimensity 800U seems like a suitable processor choice in accordance with performance as well as price.