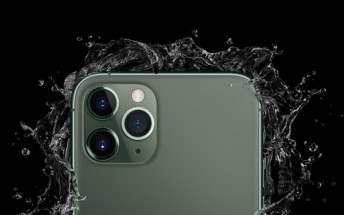 Earlier today the iPhone 11, iPhone 11 Pro, and iPhone 11 Pro Max went up for pre-order in a lot of countries, so it's not very surprising that Apple saw fit to launch its full-on video ad campaign for the iPhone 11 Pro at the same time. These ads should drive some people to hit that Pre-order button, we assume.

The first one is all about toughness, with the phone being put in a high-speed wind tunnel with objects being flung at it. Kids toys, food, ice cubes, hair brushes - they all bounce off the iPhone 11 Pro without leaving a mark. So it looks like we're going to have to wait for the JerryRigEverything torture test to figure out just when to expect scratches and deeper grooves.

The video is embedded below, but we're seeing intermittent errors when trying to play it back, so if you encounter that too, then here's the direct link to the video on YouTube.

The other video is all about the brand new triple rear camera system, with which Apple has finally caught up to what has basically been the entire Android world's philosophy for the past year or so, with the notable exception of Google.

Again we're currently seeing errors popping up intermittently while attempting to play from the embedded frame below, so we're sharing the link to the video just in case you encounter the same thing.

This time around there's a dog in the wind chamber, and its purpose is to show you the differences between the way the three lenses capture things. Night Mode is shown too, with impressive looking results, but that's hardly shocking as this is an ad meant to drive sales after all.

The new iPhones will be available on September 20.

Sure it might be tough, but the rear of this phone is really ugly.