The latest nubia Z30 leak (posted by C Technology) spices things up color-wise – the render shows the phone from behind at an angle that allows us to see both the rust-colored back and the gray front. The dividing line between the two colors goes around the frame.

Well, we don’t actually see the front, not in this render. The display is supposed to have an under-display selfie camera, but there’s more than that. The Z30 could also feature the first under-display 3D ToF sensor for face ID. ZTE demoed such a sensor at MWC Shanghai earlier this year. 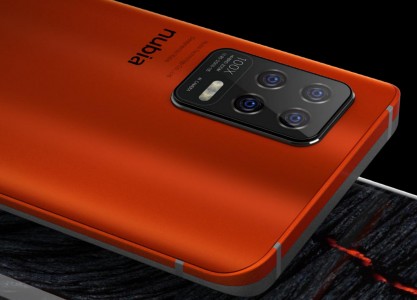 Anyway, back to the render. You can see the “100x hybrid zoom” label as well as the focal lengths of the ultra wide and the telephoto lenses, 16 and 135 mm, respectively. So, it's not official, but the possibility of a periscope on the Z30 is growing.

According to Digital Chat Station, the nubia Z30 will have a secondary display on its back, just like the Z20. However, the phone’s development got delayed, so it may be two months before it is unveiled officially.

The Z30 may have been certified by the 3C earlier today with support for Red Magic’s 120W fast charging. Battery capacity is still unknown, however. Most likely it will match the Red Magic 6 Pro, which has 4,500 mAh in China and 5,050 mAh for the global market (though on that version fast charging is capped at 66W).

Sorry for defending what I stand for and to have this thing called "arguments".

Everywhere article that has demongornot's comment, it will be an essay competition. Lol what a nerd

I've been using Z20 pretty much by the time it was available in Europe. Solid device with some great specs. But... Get serious guys... All good with the specs, screen, etc...the fact that I've never received an update on the phone, not even...