OnePlus has started pushing out a new update to its 5 smartphone. Arriving as OxygenOS 4.5.5, the update weighs in at around 60MB, and brings optimizations and bug fixes, but seemingly no new features.

Wi-Fi connectivity has been improved and voice calling has been made clearer. Other optimizations are related to video recording (which now consumes less battery) and incoming call vibration intensity (which has been turned to a gentler level). 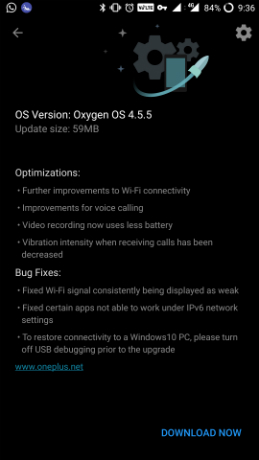 The issue which caused Wi-Fi signal to consistently being displayed as weak has been resolved. So is the one related to certain apps that were not able to work under IPv6 network settings.

The changelog also mentions the following advice: "To restore connectivity to a Windows 10 PC, please turn off USB debugging prior to the upgrade."

OnePlus 5 has good chance of surviving in water, just don’t try it at home

OnePlus 5 owners are reporting a “jelly” effect when scrolling

first of all its not a so called OnePlus 5 it is called OnePlus5, it is not only his but everyone who buys one. You really are talking trhough your so called arse...i have the phone ..i also have the s8+ and the iphone 7 plus..its no better than thos...

I'm using this phone for a week now. I must say that this phone is a speed monster. It's worth every single penny. You can't get a phone with those specs in that amount.